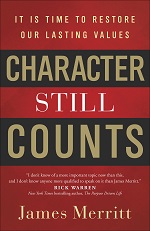 Some might think character no longer matters to evangelical Christians. And Merritt provides some evidence that indicates it might very well be the case. He notes that for the 1992 presidential election of Bush/Clinton, Republicans were concerned about Clinton's morality. Christians criticized the candidate for being a draft dodger and his lack of marital fidelity yet in 2016 overwhelmingly voted for just such a man. In 2011, only 30 percent of evangelicals believed an immoral man could be an effective and good leader. In 2016, that number had jumped to 72 percent. (Loc 144/3042) It would seem evangelicals no longer value upstanding character.

Losing the value of character comes at a high price, Merritt says. Are we personally maintaining a high standard of character? Are we training our children in godly character traits? He reminds us character does not develop by accident. He has written this book to remind us of godly character traits and encourage us to develop them. He writes about integrity, honesty, humility, loyalty, honor, respect, authenticity, generosity, courage, perseverance, self control, forgiveness, and faithfulness.

I like how Merritt has structured his writing. He tells stories as illustrations, including some of his own, ones from the Bible and the example of Jesus. He even includes some funny stories. He has thoughtful commentary on each of the character traits and provides some practical suggestions for developing them.

I recommend this book to evangelical Christians. It is a penetrating reminder that character matters and ignoring godly character has serious consequences.

James Merritt (PhD) is a pastor, author, past president of the Southern Baptist Convention, and host of the Touching Lives television program. He has been interviewed by several media venues. He lives with his family outside Atlanta, Georgia.

I received a complimentary egalley of this book from the publisher. My comments are an independent and honest review.
Posted by Joan Nienhuis at 7:52 PM

Beta-readers are indeed extremely important in your process. They will catch mistakes even you or a proofreader didn’t catch, and give amazing tips on how to develop further your story. I used https://honestbookreview.com to get a few reviews and also promote my book. Hopping to be in the top 100 genre lists and see better sales this Christmas season…