The Mind of a Conservative Woman by Marsha Blackburn 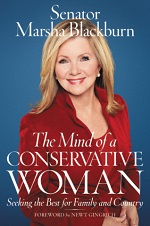 I was disappointed Blackburn begins her book with a vicious attack on Democrats in general and female Democrat congresswomen in particular. She likened them to Stepford wives, robotic and unthinking in their actions. They advocate government control from cradle to grave, she says. Conservative women on the other hand, are smart, study the facts, and are confident according to Blackburn.

It was evident from the opening salvo that Blackburn is not interested in bridge building nor does she follow the command of Jesus to love our enemies. Her obvious disgust for anything from the Democrats' camp was disconcerting. And this, even though she admonishes others to always be kind and hospitable to people. (65.7%)

The memoir part of Blackburn's book is encouraging. I wish she would have started with that and then, after engaging the reader, share her harsh opinions of Democrats. A savvy editor should have made such a content change. Her defense of conservatism is well presented and understandable. She has great encouraging suggestions for conservative women. She includes smart dialogue talking points on misunderstood conservative issues.

This book will help you understand the conservative mind of a woman who sees impoverished and repressed women on an overseas trip and passionately wishes they had the same opportunities as women in the U.S. and yet at the same time is working on lowering the caps for refugees. (58.3%) It helps you understand the mind that is violently opposed to abortion and the 1,700 murdered each day yet approves of the actions of a man who has allowed nearly 200,000 die of a virus by refusing to act in a timely manner, preventing so many unnecessary deaths. It helps you understand the mind who admits man is fallen and prone to evil, who wants clean air and clean water, who defends property rights so long as they do not hurt others (38.7%) yet says we must let industries police themselves. (74.0%)

This is a good book to understand the mind of a conservative woman. Those who think the right can do no wrong and the left can do no right will love it. Conservative woman looking for practical strategy to stand their ground will be encouraged. Moderates may find more fury and disgust than love and compassion.

Marsha Blackburn is the first woman ever elected to the United States Senate from Tennessee. Prior, she represented Tennessee's Seventh District in the United States Congress for sixteen years and served as a state senator for four years. She is the mother of two, a grandmother to two, and wife of her husband, Chuck, to whom she has been married for over forty years.

Posted by Joan Nienhuis at 6:38 AM

Joan, This is probably not the best way to reach you so I apologize. I would like you to consider a new book for review Somebody Someday by Joye Holmes. It is a compelling true story of a 25-year friendship and correspondence with a homeless man. Please go to Amazon to see if worth your consideration. If so, I can send a free copy. gary@firemountainpublishing.com You do not need to respond and you can delete this post.

Yes, there is not enough balance in our conversations anymore! Gary