Taking America Back for God by Andrew Whitehead and Samuel Perry 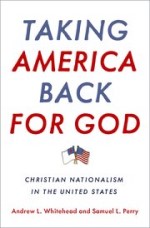 This book helped me understand the underlying ideology of Christian nationalism. I had no idea of the intensity of its existence in the political realm. The authors helped me understand what the ideology is and how Christians and others embrace or reject it. Much of the information in this book comes from questionnaires and personal interviews.

Many strongly believe that the United States is a “Christian nation,” blessed by God from its founding. That blessing is in danger of being lost because of moral and cultural decline so drastic action needed to be taken. I was surprised to find that this movement is not a grass roots one but was strategically designed. While initially one might consider the actions as aimed toward cultural issues, it soon became a strong political force.

The book is not a critique of Christian nationalism but rather a statistical look at it as well as what people say who embrace or oppose it. The authors did make a prediction, suggesting the future will see a reduction in numbers but an increase in activity. Sobering words with some prophetic force.

I recommend this book to those interested in understanding the movement and its current state.

Andrew L. Whitehead is an Associate Professor of Sociology at Clemson University and Assistant Director of the Association of Religion Data Archives.

Samuel L. Perry is an Assistant Professor of Sociology and Religious Studies at the University of Oklahoma.

Posted by Joan Nienhuis at 1:28 PM