The Constantine Codex by Paul Maier

What if the end of the Gospel of Mark was found? What if a continuation of Acts existed?


Shannon Weber, a successful archaeologist, finds a document referring to a third book written by Luke, an Acts volume two. That such a manuscript would be found seemed unlikely, after all these years.
Shannon's scholar husband Jon (Skeleton in God's Closet, More Than a Skeleton) has his life disrupted when a book he wrote on the life of Christ is mistranslated into Arabic. The mistranslation has a slur on Islam and a fatwa is announced. A moderate Muslim scholar challenges Jon to a debate. Jon accepts and it is set to take place in Istanbul.

The Webers plan to work on a project of photographically preserving ancient Christian manuscripts. They continue the planning of the project as Jon prepares for and then successfully completes the debate.
Jon & Shannon receive permission to view the manuscripts held by the Eastern Orthodox Church in Istanbul. They discover one of the fifty copies of the New Testament that the Emperor Constantine authorized Eusebius of Caesarea to prepare. It contains the missing ending to Mark's gospel and the third book Luke wrote to Theophilus, the second book of Acts. It is clearly equal or superior to the Sinaiticus, the Vaticanus, and the Alexandrinus.
The discovery is the property of the Eastern Orthodox Church, as it was found in the basement of the Eastern Orthodox Patriarchate. The manuscript is left in the possession of the Orthodox Church in Istanbul.
Jon brings back photographs for linguistic study and translation by his group of scholars. For the material study (carbon dating, for example), the Patriarch is invited to America and is asked to bring the codex. When the Patriarch arrives, Jon discovers the Patriarch has delivered a worthless imitation. The codex has been stolen.


Up to this point the novel was pretty exciting. After the codex turns up missing (the first time), the plot line and action gets repetitive. The codex is recovered and then caused to go missing again and is then found again. That seemed a bit much, to me. By that time the intrigue, for me, was gone and it seemed just a device to lengthen the book.
One does learn a great deal in this novel about manuscripts, their evaluation, preservation, interpretation, etc. There are times, however, when I felt the dialogue between characters was very forced. Both people should have known the facts being discussed and the dialogue's only purpose, it seems, was to inform the readers of those facts.


Nonetheless, the are many issues addressed in this novel. Could it ever be that the canon would not be “closed”? Would it be possible to have a truly ecumenical council today, as the church had in the first centuries of its existence?
There is also quite a bit about Islam in the book. One sees the radicals opposing the more moderate believers of that faith.


If you don't know very much about manuscript evidence this would be a great read for you. You'll learn lots. 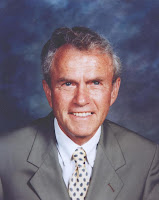 Paul Maier is a Professor of Ancient History at Western Michigan University. He has written many novels, nonfiction, children's books and scholarly articles.


I received an egalley of this book from the publisher for the purpose of this review.


Tyndale House Publishers, 416 pages.
Posted by Joan Nienhuis at 5:50 AM