Cleo has to live with what she has done and right now, that is not very easy. If it hadn't of been for Cleo, her mother wouldn't be dead.

It all started the last night Lola, Cleo's best friend, was in town. Lola had won tickets to a Christian concert in the city and the girls planned to go. But Cleo's mom said “no.” Cleo's dad was out of town on a business trip and her mom was going to a bachelorette party of a college friend. There was no way Cleo's mom would let her drive her dad's car to the part of the city where the concert is.
But Cleo has it all figured out. She is almost eighteen, after all. They take the metro bus to the concert and back. There are some scary times with creepy people on the bus, but they make it back OK.
Cleo is amazed to sleep in late, wondering why her mother hasn't awakened her. But her mother is nowhere in the house.
And then the doorbell. It is the police. Cleo's mom was found murdered near to where the concert was held. She finds out from Lola later that Cleo's mom had called Lola's mom and found out the girls had gone to the concert after all. She left the party to find the girls. But in that dangerous part of town, someone found her, killed her, and stole her money.
Now Cleo has to live with knowing it is her fault her mother is dead.
Cleo makes it through the funeral with the help of pain pills she managed to sneak from her mom's medicine cabinet.
But how is she going to continue living with the hypocrisy, the deceit? Should she call the guy a friend said could help her with more “medication”? How can she ever live with her guilt?


Carlson again shows her passion for writing about teen issues in this latest installment of her Secrets series. She does not shy away in this novel from the consequences of deceit. Cleo goes to church but the gospel has not become a reality in her life. Carlson has done a great job showing Cleo's need for God's forgiveness as well as needing to forgive herself.
There is a discussion guide at the end of the book and this would be a good choice for a teen reading group. 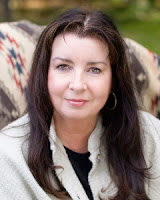 Melody Carlson has written more than a hundred books for all age groups, but she particularly enjoys writing for teens. Perhaps this is because her own teen years remain so vivid in her memory. After claiming to be an atheist at the ripe old age of twelve, she later surrendered her heart to Jesus and has been following him ever since. Her hope and prayer for all her readers is that each one would be touched by God in a special way through her stories. For more information, please visit Melody's website at www.melodycarlson.com.

I received a copy of this book from Glass Road Public Relations on behalf of the publisher for the purpose of this review.
NavPress, 198 pages.
Posted by Joan Nienhuis at 7:01 AM