The Piper by Charles Todd

Scotland Yard inspector Ian Rutledge returns shell shocked from the trenches of World War I, tormented by the spirit of Hamish MacLeod, the young soldier he executed on the battlefield. Now, Charles Todd features Hamish himself in this compelling, stand-alone short story.
Before the Great War, Hamish is farmer in the Scottish Highlands, living in a small house on the hillside and caring for a flock of sheep he inherited from his grandmother. When one spring evening he hears a faint cry ringing across the glen, Hamish sets out in the dark to find the source. Near the edge of the loch he spots a young boy laying wounded, a piper’s bag beside him. Hamish brings the piper to his home to stay the night and tends to his head wound, but by the time Hamish wakes the boy has fled. He tracks the footsteps in pursuit of the injured lad and finds him again collapsed in the grasses—now dead.
Who was the mysterious piper, and who was seeking his death? As Hamish scours the countryside for answers, he finds that few of his neighbors are as honest as he, and that until he uncovers a motive, everyone, including Hamish, is a suspect.

This is a very short stand alone story about Hamish, long before he ever met Ian Rutledge. Rutledge does not appear in this short story at all. And it is short, about 50 pages. The second half of the download contains an excerpt from the next Inspector Rutledge novel.


The story is pretty good and gives a good idea of the people in the highlands of Scotland before WW I. For readers of the Rutledge mysteries, it gives back ground material on Hamish. It is not really long enough to reveal much of Hamish's character, however. For someone like me who who has not read any of the regular mysteries, this short gave me a good idea of the quality of the writing and made me want to read more by these authors. 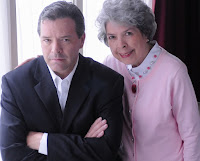 Charles Todd is the New York Times bestselling author of the Inspector Ian Rutledge mysteries, the Bess Crawford mysteries, and two stand-alone novels. A mother-and-son writing team, they live on the East Coast.

Visit the tour stops for great features & reviews!
Click here to view the 'The Piper by Charles Todd' Tour Participants

I received a complimentary digital copy of this novella through Partners in Crime Virtual Book Tours. My comments are an independent and honest review.

Posted by Joan Nienhuis at 5:12 AM