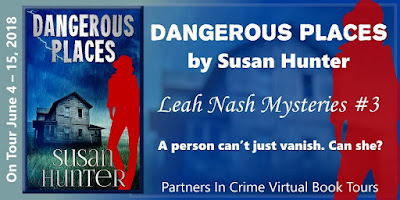 When teenager Heather Young disappeared from the small town of Himmel, Wisconsin everyone believed her boyfriend had killed her—though her body was never found. Twenty years later, his little sister Sammy returns to town. She begs her old friend, true crime writer Leah Nash, to prove her brother Eric isn’t a murderer.
But Sammy has no new evidence, and her brother doesn’t want Leah’s help. Leah says no—but she can’t help feeling guilty about it. That feeling gets much worse when Sammy is killed in a suspicious car accident. That’s when the independent, irreverent, unstoppable Leah takes up her cause. Her investigation takes her to some dark and dangerous places, and the truth she finds has an unexpected and shattering impact on her own life.


I am enjoying this series. I really like Leah. When she is on the trail of a killer, she won't let go. Even when she makes mistakes or fingers the wrong guy, she just keeps on. I like that I am learning more about her family and their history with each novel. Hunter has done a good job of making reference to a previous family tragedy in one novel and then revealing more about it in the next. I feel like I am getting to know Leah as each novel reveals additional parts of Leah's private life while the plot progresses. This novel had several emotional crises for Leah, revealing even more about her character.

Even though this novel is into the series, it does stand alone. There is enough back story that one could start with this book but the previous ones are good too and should not be missed. This one contained plenty of twists and red herrings and I found it engaging to the very end, where there is a nice bit of suspense.

I recommend this mystery to readers who like a good balance of character revelation and development combined with a journalist's tenacious investigation into a cold case.

You can read my reviews of the previous novels, Dangerous Habits and Dangerous Mistakes.

Visit the other great hosts on this tour for more great reviews, interviews, guest posts, and giveaways!
Click here to view the Dangerous Places by Susan Hunter Participants