Trailed by a stalker in New York City, Willow Thomas, a young executive, scurries back to her small North Carolina hometown and the lake house where ten years earlier a scandal revealed her entire life had been a lie, and a seed of bitterness took root in her soul. The cocoon of safety Willow feels upon her arrival home soon unravels when she meets opposition from her family, faces the man she left behind, and the stalker reveals he is close on her heels. Can Willow learn to trust God to tear out her roots of resentment, reunite her family, ferret out a deadly stalker, and to rekindle the love she left behind?

The book got off to a rough start for me. There are allusions to many people but with no background provided. We eventually find out later in the book who these people are and their significance but I would have liked that information much earlier. There are also early allusions to an event the tabloids exploited. Again, we do eventually find out all the details but I would prefer the information at the initial mention. 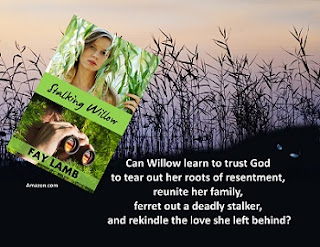 I found the dialogue often confusing. Sometimes a comment would be made and I would have no idea where it came from or where it was leading the conversation. A comment would be made without reference to who said it. A character would be mentioned in the next sentence but then it would become obvious that was not the person who had made the statement. Sometimes I just read on, not really comprehending the flow of the narrative.

Because of those issues, I found Lamb's writing style difficult to follow. I kept on thinking I was missing something and would reread preceding paragraphs only to find nothing in them to enlighten me. I still don't understand the whole trashed apartment scene and the fellows there, even after an explanation. (Loc 2975/3215)

In the end, the plot is a good one and kept me reading to the very end. There are good lessons included, such as compassion and forgiveness.

Fay Lamb has always taken joy in forming words that tell stories that will enrich the lives of others. She tackles issues that she has had to face. She isn't afraid of the hard issues and takes delight in weaving humor into the lives of her characters, even in the direst of circumstances. Fay and her husband reside in Titusville, Florida, where multi-generations of their families have lived. The legacy continues with their two married sons and six grandchildren. For more information or to schedule an interview or a workshop, contact Fay Lamb at Faywrites@cfl.rr.com.

Write Integrity Press, 300 pages. You can purchase a copy here.

I received a complimentary digital copy of this book through Celebrate Lit. My comments are an independent and honest review.
Posted by Joan Nienhuis at 6:33 AM