The Radio Signal by Friedhelm Radandt

This is a great book for readers who want to know what it was like for those living in Poland during WW II. Radandt was ten years old and living with his family in Eastern Pomerania when the Russians advanced toward his town. He tells how his family fled and survived the war. He also tells the story of the Jobs, a family in Warsaw including his future wife. He alternates the stories of the two families as they lived through Nazi rule and the eventual liberation by the Allies.

This memoir is a good one to really get a flavor of what it was like for families under German rule during WW II. I was struck by how quickly National Socialism rose in popularity. I was surprised to find that Hitler credited God for his coming to power. He also claimed that the church was one of the four pillars upon which his government stood. (38) I could see that to many Germans, being a good Christian and a good Nazi was no conflict. It was only as the Nazis became more anti-Semitic that Christians realized the problems with Nazism. If Christians stood up to the Nazis, they would lose their jobs and would definitely fear for their families. 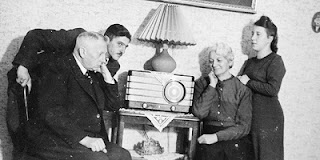 I did have a little trouble keeping the experiences of the two families straight in my mind as the narrative progressed. Family charts as the beginning of the book would have helped me.

This book may not be a literary masterpiece but it was a compelling read. There are harrowing escapes. There are miraculous reunions. There are tests of faith. There is heartfelt turmoil as Germans try to understand what is going on in their country. Through it all Friedhelm and others relied on radio reports to get true accounts of the ongoing conflict.

I do recommend this book to readers who would appreciate personal stories of ordinary lives under Nazi rule, of fleeing and leaving everything behind, relocating, finding other family members, and finally making new lives. There are discussion questions at the end of the book so this would make a good choice for reading groups, both teen and adult.

You can watch an interview with the author here.

You can read an article in the Northwestern College Magazine here.

Friedhelm Radandt, now retired, served as a college president for a quarter of a century, first at Northwestern College in Iowa and then at The King's College in New York. After arriving from his native Germany as an immigrant, he earned graduate degrees at The University of Chicago and enjoyed a rewarding teaching career at that institution and at Lake Forest College. He lives in Seattle.

I received a complimentary copy of this book through Bring It On Communications. My comments are an independent and honest review.
Posted by Joan Nienhuis at 6:59 AM