Dead in a Week by Andrea Kane Blog Tour 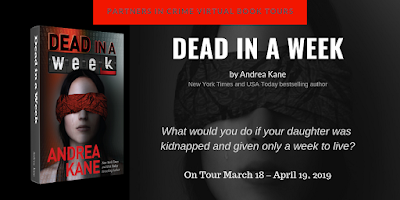 Dead In A Week

What would you do if your daughter was kidnapped and given only a week to live?

Lauren Pennington is celebrating her junior year abroad when life comes to a screeching halt. At Munich’s Hofbräuhaus, she engages in an innocent flirtation with a charming stranger for the length of a drink. Drink finished, Lauren leaves—only to be snatched from the streets and thrown into an unmarked van.

Officially, Aidan Deveraux is a communications expert for one of the largest financial firms in the world. In his secret life, the former Marine heads the Zermatt Group, a covert team of military and spy agency operatives that search the data stream for troubling events in an increasingly troubled world. When his artificial intelligence system detects Lauren’s kidnapping, Aidan immediately sees the bigger picture.

Silicon Valley: Lauren’s father, Vance Pennington, is about to launch a ground-breaking technology with his company NanoUSA—a technology that the Chinese are desperate for. No sooner does Aidan arrive on Vance’s doorstep to explain the situation than the father receives a chilling text message: hand over the technology or Lauren will be dead in a week.

In a globe-spanning chase, from the beer halls of Germany, to the tech gardens of California, to the skyscrapers of China, and finally the farmlands of Croatia, Aidan’s team cracks levels of high-tech security and complex human mystery with a dogged determination. Drawing in teammates from the Forensic Instincts team (introduced in The Girl Who Disappeared Twice), the Zermatt Group will uncover the Chinese businessmen responsible, find the traitors within NanoUSA who are helping them, and save Lauren from a brutal death.

I like a novel that has a good plot and plenty of action. This one has both. A tech company facing corporate espionage and an international kidnapping make for a compelling story. Aidan and his team are up to the challenge, with unlimited finances and the latest technology.

Kane has introduced a new covert group in this novel and I like it. I have enjoyed the Forensic Instincts novels and was glad to see some of those characters in this one. Kane manages to provide a good balance of character development, scene description and thrilling action. I like Aidan, brother to one of the FI operatives. I look forward to reading more novels centered on him, his talented group, and his pistol of a young daughter. She is something else!

This is a great novel for readers who enjoy thrilling suspense with well crafted characters and tons of the latest technology.

Andrea Kane is the New York Times and USA Today bestselling author of twenty-nine novels, including fifteen psychological thrillers and fourteen historical romantic suspense titles. With her signature style, Kane creates unforgettable characters and confronts them with life-threatening danger. As a master of suspense, she weaves them into exciting, carefully-researched stories, pushing them to the edge—and keeping her readers up all night.

Kane’s first contemporary suspense thriller, Run for Your Life, became an instant New York Times bestseller. She followed with a string of bestselling psychological thrillers including No Way Out, Twisted, and Drawn in Blood.

Her latest in the highly successful Forensic Instincts series, Dead in a Week, adds the Zermatt Group into the mix—a covert team of former military and spy agency operatives. With a week to save a young woman from ruthless kidnappers, this globe-spanning chase, from the beerhalls of Germany, to the tech gardens of California, to the skyscrapers of China, and finally the farmlands of Croatia will keep readers guessing until the very end. The first showcase of Forensic Instincts’ talents came with the New York Times bestseller, The Girl Who Disappeared Twice, followed by The Line Between Here and Gone, The Stranger You Know, The Silence that Speaks, The Murder That Never Was, and A Face to Die For.

Kane’s beloved historical romantic suspense novels include My Heart’s Desire, Samantha, Echoes in the Mist, and Wishes in the Wind.

With a worldwide following of passionate readers, her books have been published in more than twenty languages.

Kane lives in New Jersey with her husband and family. She’s an avid crossword puzzle solver and a diehard Yankees fan. Otherwise, she’s either writing or playing with her Pomeranian, Mischief, who does his best to keep her from writing.

Visit these other great hosts on this tour for more great reviews, interviews, guest posts, and giveaways!
Click here to view the Dead In A Week by Andrea Kane Participants.

Posted by Joan Nienhuis at 5:42 AM

This book definitely had lots of action. It was a book that I had trouble putting down!