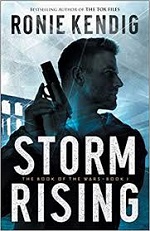 This is another action packed novel from Kendig and the beginning of a new series. Several people are hunting an ancient book that contains prophecies. Control of the book might mean the difference as to who controls the future. The bad guys are aggressive and deadly. One of them is Viorica, a female assassin held under the control of a really bad guy. But when she is confronted by Lief, a good guy from the American team, we wonder if the only way to save the world is for the two to work together. The possibility of romance is pitted against claims of deception and betrayal.

Kendig's novel is full of action and is exciting to read. Her writing style has always irritated me and this novel is no exception. I can understand incomplete sentences in dialogue but not in prose. I know it is for effect. I just don't like it.

I also get sidetracked by her use of odd verbs and adverbs. “Her pulse jammed...” (806/6573) When guns are jammed, they cease to work. But that is not what happened to her heart. “Her gaze collided with his again.” (826/6573) Cars and trains might collide, but gazes? Interestingly enough, this character actually “collided”” with a man a little later on. (857/6573)

Even though this is the first in a new series, the characters involved have a great deal of unrecorded back story. The characters frequently talk about the previous experiences but I was left wondering what they were talking about. “Ram gave his life to stop them.” (784/6573) There was nothing nearby to indicate who he stopped. Were they evil operatives or a herd of enraged bulls? We don't know.

Kendig is known for her action packed novels and this one is full of intense action and suspense. If you love action, you'll love this novel. If you're not a stickler for the proper use of language, you'll enjoy her writing style too.

Ronie Kendig is the best-selling, award-winning author of over twenty novels. She grew up an army brat, and now she and her army veteran husband live near New York City with their children and a retired military working dog. You can find out more at www.roniekendig.com.

I received a complimentary egalley of this book from the publisher. My comments are an independent and honest review.
Posted by Joan Nienhuis at 9:06 PM