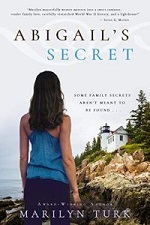 I generally enjoyed this contemporary Christian romance with a hint of mystery. The story centers around a recent widow who returns to the Maine coast where her grandparents tended an island lighthouse for decades. The contemporary romance is balanced with revelations from her grandparents' experiences during World War II.

Besides being entertained by a romance, I like to learn a bit about a new topic when I read fiction. In this case it was that four German submarines patrolling near the Maine coast surrendered at the Portsmouth Naval Shipyard when Germany surrendered, May 7, 1945. I had no idea.

Turk's novel is a fun novel even though the plot was predictable. The end went fast, from the secret being revealed to immediately moving on. The build up was such that I expected some issues with the revelation. In fact, I scrolled back on my ebook to make sure I hadn't passed a few pages. The characters were pretty well developed and I particularly liked little Emma. The setting was was interesting, an island off the Maine coast. I would have liked to know how they generated power, however. I just like those kinds of setting details. The Christian witness is strong although I was disappointed more compassion was not shown to a homeless veteran. Turk missed a potential teaching opportunity at that plot point.

Marilyn Turk is the author of several novels, novellas and a devotional. She has been published in a number of periodicals, including those from Focus on the Family, Guideposts, and others. She is a native of Louisiana and now lives in Florida. You can find out more at https://pathwayheart.com/

Posted by Joan Nienhuis at 7:30 AM