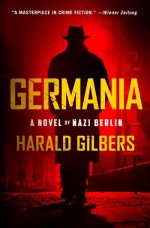 This historical crime novel takes place in war torn Berlin in 1944. A serial killer is killing women, placing their mutilated bodies in front of war memorials. The main character is Richard Oppenheimer, a Jew who was once a highly thought of investigator with the Berlin police. He is enlisted to help catch the killer while fearing for his own safety.

Gilbers gives us some insight into what it was like being a Jew in Nazi Germany. Oppenheimer's wife was not a Jew so he escaped early exile. He is under pressure because the murders must be solved but the investigation must be kept quiet. The Nazi regime did not want to admit there could be a murderer in the ethnically cleansed society. There was pressure to identify the killer as a Jew.

I enjoyed the investigative process. It first appears the murders are random but Oppenheimer finds relationships the victims had to Nazi officials. He has to avoid Allied bombing as he pursues leads. He has to walk the fine line of finding the truth while not alienating those who could send him to a deadly future.

Gilbers' writing style is clear and informative. I felt there was a good balance between the investigation and the character development of Oppenheimer. I was disappointed in the ending but other than that, an enjoyable crime novel with an interesting historical setting.

Harald Gilbers, born 1970, studied English and history in Augsburg and Munich. He was a television editor before becoming a director for the theater. Germania, his first novel, has been awarded the Glauser Prize for the best crime debut. In 2016 his novel Odins Sohne (Odin's Sons) was awarded the French Prix Historia and was shortlisted for the Festival Polar Cognac Prize for the best international novel. Photo by Ronald Hansch.

Posted by Joan Nienhuis at 7:35 PM