Insights on the Book of Daniel Blog Tour 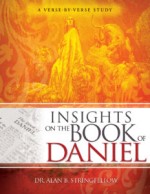 Book: Insights on the Book of Daniel

For more than four decades, Alan Stringfellow’s Bible studies have brought greater insight into God’s Word to thousands of believers. Now, the author of Through the Bible in One Year and Great Characters of the Bible leads readers on a 12-lesson, verse-by-verse study of the book of Daniel. Stringfellow’s in-depth teaching will bring clarity and understanding to one of the most misunderstood books in Scripture. With this study, readers will learn…

By embarking on this journey, believers will discover the influence that Daniel had on the life and literature of the Jewish people throughout the biblical period and all the way to the writers of the New Testament, including Jesus Christ Himself, who often quoted from it. But nowhere is that influence seen as thoroughly as in the writings of the apostle John and parallels that exist with the book of Revelation. As in John’s prophetic work, the book of Daniel describes in beautiful and marvelous language the glorious coming of our Lord, Jesus Christ. Like John, Daniel was sure and certain about the final triumph of the kingdom of God.

This is an interesting exploration of the book of Daniel. Stringfellow makes some parallels to the book of Revelation I have not seen before. He also has a different take on the “times of the Gentiles,” a phrase that does not appear in Daniel but was used by Jesus. Stringfellow says the time began in 600 BC when Daniel was taken captive rather than in AD 70 when Jerusalem was destroyed. (544/2826)

I found it odd that Stringfellow says that the church and the dispensation of this age is never mentioned by Daniel or any Old Testament prophet. (1867/2826) What of the prophecies about Jesus? Certainly fulfillment of those prophecies took place in this dispensation age. And Stringfellow says Daniel “saw” the ten toes, toes Stringfellow says were fulfilled by the common market, in this dispensation. (Stringfellow has to believe prophets did not see this age so that the last of Daniel's seventy weeks can be moved beyond this church age of two thousand years to just before Christ returns, producing a gap in prophecy.) Stringfellow references Ephesians 3:1-6 to prove no Old Testament prophet saw this time. What the Ephesians section says was a mystery was that Gentiles would be heirs with Israel, not that this this dispensation, this age of grace was a mystery. Stringfellow says the church and Israel are two separate things (2262/2826) yet Paul tells us in Galatians 3:7 that those who have true faith (believers in Jesus Christ) are children of Abraham and are blessed along with Abraham (Gal. 3:9) Paul also argues there is neither Jew nor Gentile any longer. (Gal. 3:26,28) Many theologians disagree with Stringfellow on this entire concept.

Writers about prophecy sometimes make associations I don't think work at all. Stringfellow writes that the ten toes of the statue in Daniel 2 have been manifested and find their historical fulfillment in the form of the ten nations of the common market, for example. (622/2826) The common market became the EEC in 1973 and is now the EU with 27 members. Stringfellow's association may have been interesting in 1981 when Greece became the tenth member but lost its relevance when two more nations joined in 1986. Stringfellow died in 1993 and that might explain the correlation that is no longer accurate.

Another odd association is Stringfellow writing that the seven years Nebuchadnezzar was insane is a prophecy of the seven year tribulation. (1071/2826) I see absolutely no correlation between the two other than the seven years. I don't like to force a correlation when there is really nothing there to correlate.

I found Stringfellow to be confusing at times. For example, of Daniel 8:9-14, Stringfellow argues that the prophecy was fulfilled in the time of the Macabees. “So, we have a fulfillment of the prophecy,” he writes, “and it cannot be in the future except only in type and in shadow.” (2007/2826) Yet he says the “complete fulfillment” is in the future and Antiochus is only a type, a “faint type” of who is to come at the end of the times of the Gentiles. (2028 and 2052/2826) Stringfellow tries to convince readers the man of Daniel's vision in chapter 10 is the Lord Jesus (2427/2826) yet identifies the message he spoke as through an angel. (2531/2826 ) I also found it interesting Stringfellow says the tribulation is specifically for the Jewish people. (2646/2826)

Potential readers should be aware that Stringfellow promotes a pre-tribulation rapture, a view that is by no means accepted by all evangelical Christians. Historically, it is a rather new view. Christians did not believe it for nearly two thousand years.

This is an introductory study for readers unfamiliar with the book of Daniel. Stringfellow goes through the text generally paragraph by paragraph. Seasoned Christians who have studied Daniel before will find some new and interesting insights and historical information, such as the history of Babylon. As with any book about prophecy, readers should be ready to compare ideas with those of other theologians on the same subject.

Dr. Alan B. Stringfellow (1922-1993), a Bible teacher and minister of the gospel for more than four decades, specialized in Christian education. Long concerned with the struggle most people have in understanding the Bible, he set out to write a study course that would bring believers more knowledge and a greater appreciation of God’s Word. He wrote Through the Bible in One Year, Great Truths of the Bible, and Great Characters in the Bible for laymen, to be taught by laymen. His latest studies include Insights on the Book of Revelation and Insights on the Book of Isaiah. Dr. Stringfellow trained at Southwestern Baptist Theological Seminary in Fort Worth, Texas, after which he served at Travis Avenue Baptist Church in Fort Worth; First Baptist Church of West Palm Beach, Florida; First Baptist Church of Fresno, California; and First Baptist Church of Van Nuys, California.

For the Love of Literature, December 6

For Him and My Family, December 9

Because I said so -- and other adventures in Parenting, December 15

Posted by Joan Nienhuis at 6:07 AM