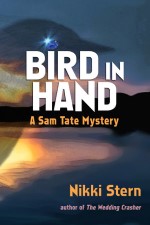 When the body of popular local guide Arley Fitchett washes up onto Maryland’s Eastern Shore, Lieutenant Sam Tate, just two months at her new job, is charged with investigating his death. She learns the dead man was searching for a carving he believed had been hidden in the area by pirates in 1718. He’s not the only one. Several others shared Fitchett’s obsession with the bird with the sapphire eye. But which one of them is the murderer—or the next victim? And how long does Sam have to catch a killer before her own past catches up with her?

"The book... allows Tate to more fully come into herown as a formidable character on whose shoulders future procedurals could confidentially be placed." ~ Kirkus Reviews

"Bird in Hand will have prior Sam fans and newcomers thoroughly engrossed, all the way to the unexpected end." ~ D. Donovan, Senior Reviewer, Midwest Book Review

"Even better than the first...leaving this reader eager for a third." ~Teri Case, author of the award-winning TIGER DRIVE

I enjoyed this mystery centered on police procedure and a female heroine. Sam Tate is a woman dedicated to her detective responsibilities, even while she deals with her childhood tragedy. I felt there was a good balance of character development and police procedure.

The plot was interesting, incorporating a combination of dealing in art objects and hunting for treasure. I really liked liked one of the final scenes with the teens. That was an enjoyable twist to the historical part of the novel. And I liked the setting. I think I got a good feel for the Chesapeake Bay and the various levels of society owning homes there.

Stern ends this novel with a certain indication there is more to Sam Tate's story. I'll be looking for the next in the series.

“Lieutenant,” he called out. “Sorry to bring you out on such a soggy night.” He suppressed an involuntary shiver.

“Duty calls, Deputy. You did the right thing.” She looked around. “Where’s the person who called it in?”

McCready cleared his throat. “I’m guessing he took off.”

She understood the young deputy’s discomfort. Poaching was a serious offense. On the other hand, the watermen who flouted the law were friends and neighbors to people with whom she worked.

“Never mind. Let’s see what he found. Grab your flashlight.”

Sam pulled a handheld marine searchlight out of the trunk of her cruiser.

“You got anything specific we can use as a starting point?” she asked.

“Dispatch said the caller mentioned sand. The shoreline is mostly rocky around here, but maybe there’s a sliver of open space right up at the point.”

Sam pulled out her phone and pulled up Google Maps. “I see it,” she said. “We’ve got to pass between these trees and the water to get to it.”

“Careful, then,” McCready said. “We’ll probably run into some pretty slippery going what with the mist and all.”

They headed towards a copse of trees adjacent to the manicured lawn. Dawn hadn’t shown itself. Absent any other illumination, they relied on their beams as they picked their way over the uneven surface.

“This is probably about the only piece of land left undeveloped around here,” McCready observed. “You wouldn’t believe how much building has gone on just in the last fifteen years.” He stumbled. “Shit! Sorry, Lieutenant.”

“Nothing I haven’t heard before, Deputy.”

They came upon a slip of sand about a hundred feet long and perhaps fifteen feet wide.

There it was, a body, face up, the left arm extended over the head as if to ward off a blow. The right arm rested on the chest as if in benediction. Both hands were blackened.

She set her searchlight down and crouched by the corpse. The beam coming from McCready’s flashlight wavered.

Nikki is the author of five books, all of which have earned critical praise. Her essays have been published in the New York Times, USA Today, Newsweek, and Humanist Magazine as well as in three anthologies. She collaborated on a series of interactive murder mystery musicals that make up the Café Noir series, published by Samuel French.

I received a complimentary digital copy of this book through Partners in Crime Virtual Book Tours. My comments are an independent and honest review. The rest of the copy of this post was provided by Partners in Crime Virtual Book Tours.
(My star ratings: 5-I love it, 4-I like it, 3-It's OK, 2-I don't like it, 1-I hate it.)
Posted by Joan Nienhuis at 5:46 AM

A sequel? Then I better get a copy of his one so I don't fall behind.