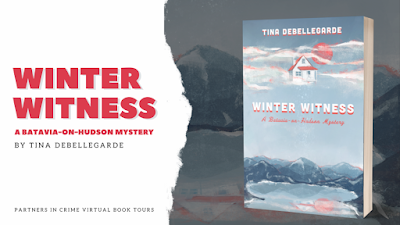 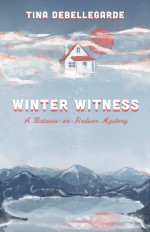 When a beloved nun is murdered in a sleepy Catskill Mountain town, a grieving young widow finds herself at the center of the turmoil. Bianca St. Denis is searching for a job and seeking acceptance in her new home of Batavia-on-Hudson. Agatha Miller, the nun’s closest friend and the ailing local historian everyone loves to hate, shares her painful personal history and long-buried village secrets with Bianca. Armed with this knowledge, Bianca unravels the mysteries surrounding the death while dealing with the suspicions of her eccentric neighbors.

However, Bianca’s meddling complicates the sheriff’s investigation as well as his marriage. Can Sheriff Mike Riley escape his painful past in a town where murder and infighting over a new casino vie for his attention?

Danger stalks Bianca as she gets closer to the truth. Can the sheriff solve the mystery before the killer strikes again? Can the town heal its wounds once the truth has been uncovered?

I thoroughly enjoyed this murder mystery. I liked the setting of a small town where it seems everyone knows everyone else yet there are deadly secrets behind some of the personal facades. I liked the main character, Bianca, and her struggles with feeling like an outsider even though she's lived there for a few years. I liked the support characters too. After all, what's not to like about a hundred year old fellow with a skunk for a pet?

I really like deBellegarde's smooth writing style. The plot centers more on characters than the murder. The narrative jumps around to different people and I felt like I was looking over their shoulders. Often I don't like this technique but it really worked in this novel. The changes in locations and characters was not confusing at all. The plot flowed well as it moved to a short period of suspense near the end.

This is a good novel for readers who like a cozy murder mystery with a reluctant amateur sleuth who discovers that people may not be who they appear to be. I enjoyed it and will be looking for the next in the series.

She could have been sleeping, were it not for the gaping gash in the back of her head and the bloody stone next to her limp body.

Sheriff Mike Riley stood alone on the shore of the near-frozen lake. At his feet, Sister Elaine Fisher lay face down, ice crystals forming around her body where it met the shoreline. The murmuring water of the nearby stream imparted a peacefulness at odds with the scene. In the waning winter light, he paused ankle deep in the snow illuminated by the beat of red strobe lights.

Murder seemed so extreme. The villagers would be baffled. Murder didn’t happen in sleepy Batavia-on-Hudson. An occasional stolen bicycle, some were paid off the books, but that was hardly worth mentioning. Lately, there had been a handful of amateur burglaries. Murder was another story altogether.

But there was no denying it. Elaine’s body was there before him, lifeless on a cushion of snow at the edge of the lake.

Sheriff Riley ran his chapped hands through his salt and pepper hair. A knowing person might have noticed that he used this motion to disguise a quick brush at his cheek, to eliminate the one tear that slipped through.

He feared this day, the day his lazy job would bring him face to face once again with the ugly underbelly he knew existed even in a quiet place like Batavia-on-Hudson. Mike Riley wasn’t afraid of death. He was afraid of the transformation a village like this was bound to go through after an act of murder.

He cried for Elaine; though he barely knew her. But also, he cried for the village that died with her that morning. A place where children still wandered freely. A village that didn’t lock doors, and trusted everyone, even the ones they gossiped about. Now, inevitably, the villagers would be guarded around each other, never quite sure anymore if someone could be trusted.

He thought he could already hear the locks snapping shut in cars and homes as word of the murder got out. Mothers yanking children indoors, hand-in-hand lovers escaping the once-romantic shadows of the wooded pathways, and old ladies turning into shut-ins instead of walking their dogs across the windy bluff.

He squatted in the slush, wincing as his bad knee rebelled, and laid his hands on Elaine’s rough canvas jacket, two-sizes too big—one of her thrift shop purchases, no doubt. As reverently as was possible in the muddy snow, Mike Riley turned over her body to examine the face of a changing village.

Sister Elaine had no one left, she had no known siblings and of course, no spouse or children. Only Agatha Miller, her childhood companion, could have been considered next of kin. How Elaine had tolerated her grumpy old friend was a mystery to everyone.

The sheriff knew that Elaine’s death would rock the community. Even a relative outsider like Mike understood that Elaine had been an anchor in Batavia. Her kindness had given the village heart, and her compassion had given it soul. No one would be prepared for this.

Mike knew from experience that preparation for death eases the grief. You start getting ready emotionally and psychologically. You make arrangements. You imagine your life without someone. But Mike also knew that when the time comes it still slaps you in the face, cold and bracing. And you realize you were only fooling yourself. Then somehow, in short order, work becomes demanding, bills need to be paid and something on the radio steals a chuckle right out of your throat. For a brief second you realize that there are moments of respite from your grief and perhaps someday those moments will expand and you may be able to experience joy once again.

But for now, Elaine’s death will be a shock. No one had prepared for her death, let alone her murder.

Tina deBellegarde lives in Catskill, New York with her husband Denis and their cat Shelby. Winter Witness is the first book in the Batavia-on-Hudson Mystery Series. Tina also writes short stories and flash fiction. When she isn’t writing, she is helping Denis tend their beehives, harvest shiitake mushrooms, and cultivate their vegetable garden. She travels to Japan regularly to visit her son, Alessandro. Tina did her graduate studies in history. She is a former exporter, paralegal, teacher, and library clerk.

I received a complimentary digital copy of this book through Partners in Crime Virtual Book Tours. My comments are an independent and honest review. The rest of the copy of this post was provided by Partners in Crime Virtual Book Tours.
(My star ratings: 5-I love it, 4-I like it, 3-It's OK, 2-I don't like it, 1-I hate it.)
Posted by Joan Nienhuis at 6:05 AM

I wanted to read this book for the tour but am so behind in my reading. But I will definitely get myself a copy to read in the near future.

Joan, thank you for your lovely review of WINTER WITNESS. I am so pleased you enjoyed it. I am diligently working on Book #2 DEAD MAN'S LEAP - due out next September.