The Well of Ice by Andrea Carter 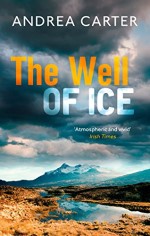 I liked this mystery set in Ireland and featuring a female amateur sleuth. Solicitor Benedicta “Ben” had moved to the Inishowen Peninsula to escape her past and start a new life. But then she saw the man who had killed her sister ten years prior. He had recently been released from prison. And then things begin to happen in Glendara. A favorite pub burns and the barmaid is found murdered. And then strange things begin to happen to her.

This is not really a police procedural novel. It is more about how Ben talks to people, finding out about them and inquiring as to what they know. Histories and secrets are slowly revealed as Ben tries to figure out what is going on and who is behind the evil deeds.

This is the third novel in a series but it read well on its own. It is a good novel for readers who enjoy one concentrating on character interaction as the way to solve a murder mystery. You'll have to be interested in the lives of a variety of characters to remain engaged in this novel. You will get a very good sense of place in a remote location in Ireland. Carter does well with descriptions, setting the story securely in the remote and winter weather of the peninsula. I can't imagine Ben wanting to swim in the cold coastal waters. That alone made me shiver.

Andrea Carter grew up in Laois and studied law at Trinity College, before moving to the Inishowen peninsula in County Donegal where she ran the most northerly solicitor's practice in the country. In 2006 she returned to Dublin to work as a barrister before turning to write crime novels.

Posted by Joan Nienhuis at 6:21 PM