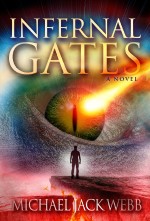 Webb's novel take readers into the spiritual world of angels and demons and how they might interact with humans. The novel begins with a deadly airplane crash. While all appear to have perished in the crash, one man survived. Ethan was mysteriously saved from death and transported back to his home. He and an agent from NTSB work together to unravel the cause of the crash and soon are facing evil supernatural beings.

The major theme running through this novel is spiritual warfare. Webb explores the concept that the warfare has been going on for millennia. God has gifted certain people to fight the evil forces and it seems the ongoing battle is coming to a climax.

There is a great deal of information included in this novel. There is much about the legends of Native Americans. There is an exploration of the history of the Hmong people and the cause of airplane crashes. There is some information about creationism and evidence for a young earth. Perhaps most interesting of all is a possible explanation for that strange passage in Jude 6 about angels being bound in chains until judgment day.

This is an earlier novel of Webb's. While there is plenty of action, I found the information packed sections did not flow as well as they do in his later novels. Nonetheless, it is an engaging novel and thought provoking for Christian readers.

I have also read the sequel to this novel, Devil's Cauldron, and you can read my review here.

Michael Jack Webb has a BA in History from the University of Florida and obtained his J.D. from the same university. Then he went into the business world, where he has been ever since. Webb is an eclectic reader, exploring topics like quantum physics, forbidden history, angels and demons, paleontology and archaeology, science fiction, and fantasy. He has traveled extensively, often setting his novels in places he's been. He and his wife live in North Carolina. You can find out more at https://www.michaeljackwebb.com/.