Condition Black by Jones and Worthington Blog Tour and Giveaway 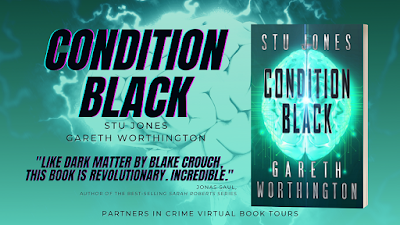 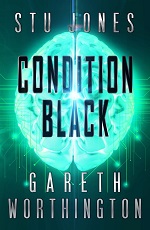 EVAN WEYLAND, a brilliant research scientist tasked with developing new technologies to fight cancer, sees the world differently through the lens of Autism Spectrum Disorder. His guiding light is his wife, Marie—a globally recognized war correspondent. When she returns home from Syria deathly ill with an unknown disease, Evan believes his research may be the key to unlocking the cure. However, when his superiors refuse his request for help, Evan’s single-minded love for Marie drives him to take matters into his own hands—a decision with far greater consequences than he could possibly fathom.

BILLY VICK, a Captain in the Army’s Criminal Investigation Command, is a combat veteran unable to leave the horrors of war behind. Only the love of his family and a sense of absolute justice keeps him grounded. When Billy’s unit becomes aware of a US-sanctioned airstrike on a civilian settlement in Syria and an eye-witness reporter comatose with an unknown illness, he fears the worst. An unethical military project thought mothballed has resurfaced, and a civilian, Evan Weyland, may be about to inadvertently unleash it upon the world. It’s a mistake that could cost the lives of millions.

Pitted against each other in a game of chess-like deception and intrigue, with time running out, both men must come to terms with the magnitude of what’s at stake—and what each is willing to sacrifice to win.

"This solid sci-fi thriller [is] a well-balanced thrill ride. Well-shaded characters keep the pages turning. Fans of high-tech medical and military thrillers should check this out." ~ Publishers Weekly.

Like Dark Matter by Blake Crouch, this book is revolutionary. Incredible." ~ Jonas Saul, author of the best-selling Sarah Roberts series.

"Condition Black provides such an exceptional read. It's highly recommended for fans of technothrillers who want a firm marriage between psychological depth and unpredictable action, all grounded by ethical concerns that challenge each character to reach beyond his skill set and comfort zone." ~ Diane Donovan, Midwest Book Review.

This is an action packed novel with a plot centered on cutting edge medical research, using nanobots within the human body. The future setting is scary with restricted freedoms imposed by the government because the public is filled with fear of terrorist attacks. The most suspenseful part of the plot centers around warfare inside a human body, on a cellular level. (I appreciated the nod to the 1966 film, Fantastic Voyage.) But the rest of the plot contains lots of action too as a couple of good guys try to save humanity from nefarious villains.

The novel contains a good balance of thrilling action and personal life concern. I did feel like I had missed an earlier novel as there were many references to a Project Omega that the hero had thwarted. It wasn't until just over halfway through the book we readers get the back story on that project and its relevance to this story. I would have preferred that information earlier in the plot structure. Nevertheless, the writing style and subject matter make this novel an engaging one.

This is a good action packed novel revolving around one man saving humanity from powerful and evil men. You'll read about advanced biological warfare, both on a large and very small scale. You may conclude, as I did, that this future horror is all too possible.

Through the lens of her SLR, Marie Wayland couldn’t pry her gaze from the morbid scene as it unfolded some two hundred feet away. Another twist of the objective and the image in her ultralight mirrorless camera became crystal clear, even in the fading evening light of the Syrian sun: a man, his hands bound secure with coarse rope, sucking with erratic breaths at the cloth bag over his head. The fabric molded to the shape of his quivering lips and stuck there for an instant before being blown out again. He cried out as two masked assailants forced him to his knees. A whimper emerged from beneath his hood, followed by a muffled plea for mercy. Unwavering, the men stood in a line behind the captive, their AK-47 rifles pointed to the sky. Above them all, a black flag, inset with white Arabic script, fluttered like a pirate banner in the desert wind.

A young man carrying a beat-up camcorder scurried onto the scene and set up his tripod. He fiddled with his equipment, then gave a thumbs up. One of the soldiers stepped forward and pulled a curved blade from his belt. He called out and pointed to the camera, stabbing the air with the long knife. For a moment, he seemed to look right at Marie. Her heart faltered and the hot prickle of perspiration dampened her forehead.

Marie lowered her camera and eased further into a small depression in the side of the hill, perfect for both observation and concealment. “Don’t be tree cancer,” she whispered to herself. A strange phrase, but one that had proved invaluable during her long and storied career as a war correspondent. A Marine Corps scout sniper had offered her this golden nugget of advice during a stint in Afghanistan. Master of short-range reconnaissance, he’d spotted her crouched in a ball, peering out from behind a twisted stone pine tree. After approaching undetected, he’d whispered in her ear: Don’t be tree cancer. Marie had nearly jumped out of her skin. She later discovered the phrase referred to an observer drawing attention to themselves by standing out from the world around them.

The voice of the knife-wielding man rose in pitch. Marie shuffled for a better view and raised her camera once again.

The knifeman jerked the hood from the captive’s head.

A chill crawled down Marie’s spine.

Glen Bertrum, the American relief worker kidnapped three months ago from the outskirts of Aleppo, shifted on his knees. With a brutal shove from his captors, the terrified relief worker flopped to his side, squirming. The knifeman descended on Glen, then sawed at his relief worker’s neck with the blade. Blood sprayed against the sand. Glen screamed for what seemed an eternity, the sound morphing into a horrible sucking wheeze.

The men shouted in victory, thrusting their weapons into the air.

The cruelty and barbarism of humankind knew no end, and these zealots had a way of making it even uglier, spreading their jihad across the globe like a pestilence. Without raising the SLR again, she watched the terrorists conclude the recording and march away, leaving Glen’s decapitated body to rot.

Marie’s stomach knotted, and she tried to swallow away the tingle of nausea in her throat. This isn’t why you’re here, she thought. A beheaded aid worker wasn’t news, even if she had met the man before. Such things hadn’t been news for a long time. The war had escalated, far beyond Syria and the Middle East, beyond single hostages and beheadings. Terrorist cells were now a pandemic, spread across the globe, and embedded in every country. There was no central faction anymore. No IS or al-Qaeda, or Allah’s Blade. The war against the west was now an idea, a disease infesting the world. Anyone, anywhere could be an enemy—the core vision metastasizing, traveling to every corner of the Earth and there propagating.

Major cities now operated under war-time policy; curfews and rationing to prevent too many people congregating in any one place, such as a supermarket or a major sporting event. Aerial surveillance and street-level military patrols did their best to keep people safe, but a cage was a cage. In some ways, Marie felt free out in the world, even if it was in the enemy’s backyard. Yet while hate for terrorists was justified, as in all wars the enemy wasn’t the only one capable of terrible things. So too were the allied forces—the people who stood against terror and extremism—and that was why she was in Syria.

The little jaunt Marie had undertaken was unofficial. Her boss would kill her if he knew she’d conducted this op. After flying into Istanbul and crossing the border south of Daruca, she’d spent the better part of the past three days moving from checkpoint to checkpoint, working her way along Highway 7 through northeastern Syria. With dark features and perfect Arabic, Marie hid with ease among the local population.

Marie pulled a tablet from her backpack and keyed up the map she’d gotten from her contact. The coordinates were correct. A tiny civilian village in Northeastern Syria. This ramshackle settlement was little more than a speck on the map, and from what she was told by her contact, this place was of zero military significance. No base, no known weapons caches, no landing strips. The small cell of terrorists she’d just found was likely that: a small cell. Little more than a coincidence, and by no means justification for this village to be firebombed back to the stone age.

Unless they’d found something of significance.

Gareth Worthington holds a degree in marine biology, a PhD in Endocrinology, an executive MBA, is Board Certified in Medical Affairs, and currently works for the Pharmaceutical industry educating the World's doctors on new cancer therapies.

Gareth Worthington is an authority in ancient history, has hand-tagged sharks in California, and trained in various martial arts, including Jeet Kune Do and Muay Thai at the EVOLVE MMA gym in Singapore and 2FIGHT Switzerland.

Born in England, Gareth has lived around the world from Asia, to Europe to the USA. Wherever he goes, he endeavors to continue his philanthropic work with various charities.

A veteran law enforcement officer, Stu has served as a beat cop, narcotics, criminal investigations, as an instructor of firearms and police defensive tactics and as a team leader of a multi-jurisdictional SWAT team. He is trained and qualified as a law enforcement SWAT sniper, as well as in hostage rescue and high-risk entry tactics. Recently, Stu served for three years with a U.S. Marshal's Regional Fugitive Task Force – hunting the worst of the worst.

He is the author of multiple sci-fi/action/thriller novels, including the multi-award-winning It Takes Death To Reach A Star duology, written with co-author Gareth Worthington (Children of the Fifth Sun).

Known for his character-driven stories and blistering action sequences, Stu strives to create thought-provoking reading experiences that challenge the status quo. When he's not chasing bad guys or writing epic stories, he can be found planning his next adventure to some remote or exotic place.

Stu is represented by Italia Gandolfo of Gandolfo-Helin-Fountain literary

This is a rafflecopter giveaway hosted by Partners in Crime Virtual Book Tours for Stu Jones & Gareth Worthington. There will be two (2) winners who will each receive one (1) Amazon.com Gift Card. The giveaway begins on April 26, 2021 and ends on May 22, 2021. Void where prohibited.

I received a complimentary digital copy of this book through Partners in Crime Virtual Book Tours. My comments are an independent and honest review. The rest of the copy of this post was provided my Partners in Crime Virtual Book Tours.
(My star ratings: 5-I love it, 4-I like it, 3-It's OK, 2-I don't like it, 1-I hate it.)
Posted by Joan Nienhuis at 6:20 AM

Thanks for the great review! I read this one and loved it!