The Silver Shadow by Liz Tolsma 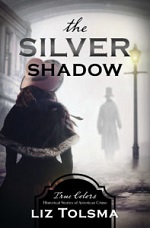 I have enjoyed the True Color series, novels based on crimes from decades ago. This one is about attacks on women in Denver in 1900. The heroine is a female newspaper reporter. Polly writes about society events but thrives on excitement and wants to write a big story. Edwin is the hero, a Denver police detective. The two cross paths as more women are attacked and some die. Polly calls the attacker The Silver Shadow in an article. Can she and Edwin find the man before Polly becomes a victim herself?

Tolsma has written three others in this series and says this is the most fictionalized of the four. She had little information to go on but does identify the factual elements of the novel in her Author's Notes.

The role of women in general was a major theme of the novel. It was a time when women were not thought to have the kind of character needed to write serious newspaper articles. Tolsma built up the animosity to women by creating a reporter who disliked Polly's attempt to be a serious reporter. Tolsma also fictionalized the motives of the attacker. He misconstrued Scripture, claiming that women should be in the home and not walking alone on Denver's streets at night, even if returning home from church services or errand of mercy. And Polly's father was another male who felt she should get married and settle as a housewife and mother. Another issue in the novel was guilt. Edwin struggled with guilt over a deadly event that happened when he was eleven years old.

Tolsma is an accomplished author but I felt this story was drawn out. Perhaps that was because she had little to go on. The action seemed repetitive although a budding romance between Polly and Edwin did spice it up a bit. I do appreciate the factual elements Tolsma added to the plot.

Liz Tolsma is the author of several novels of World War II, romantic suspense, and Amish romance. She is a popular speaker and editor. She and her husband live on a Wisconsin farm with their youngest daughter. Their son is a US Marine and their older daughter is a college student. You can find out more at www.liztolsma.com.

Posted by Joan Nienhuis at 3:58 PM