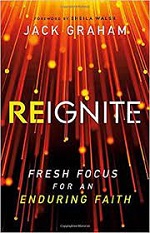 Graham had surgery for prostate cancer and then experienced a year of depression. He is open and honest about seeing a therapist and being prescribed the necessary medication. His depression and professional care was hard for him to admit publicly since he grew up in a time when therapists were not used by Christians.

While the therapy and medication helped, Graham says the habit that sustained him was his time in God's Word. When nothing else seemed to be working, making God's Word a priority carried him through. The experience reignited his faith and he hopes this book will help reignite our faith too.

Graham starts out with reflections on his personal experience, but the book quickly becomes just another one on Christian living. He encourages us to be in the Word, be in prayer, commit to attending church, etc. He writes how we will be affected by being in small groups, for example, but never how being in a small group helped him personally in his time of healing depression. He writes about the fear of death but does not communicate from his own feelings when the surgeon said he was not sure he got all the cancer. (197) Graham did share some of his feelings from time to time, but I felt most of the book was oddly impersonal. He writes as if he is preaching from the pulpit (he is a preacher) rather than as a friend sharing his heart, sitting across a coffee table from you. He writes his teaching mostly using illustrations from the Bible or the lives of others, not using his own life transforming experiences as examples.

Graham is sometimes so objective and simplistic, her forgets his own experience. “I'm telling you, anytime you have trouble persevering in life, simply look up and remember Christ, the author and finisher of our faith.” (216) This from the man who battled depression for a year and sought professional counseling and medication on his journey to spiritual well being.

If you are looking for a rather impersonal book on Christian living, such as suggested habits and the benefits from doing them, this is the book for you. If you are looking for how the experience of depression transformed the pastor of a mega-church, developed humility and compassion and empathy for others in a similar situation, resulting in heartfelt insights from that personal experience, you may need to look elsewhere.

Jack Graham is pastor of Prestonwood Baptist Church of more than 47,000 members. He is the author of several previous books. His teaching is viewed and heard around the world via PowerPoint Ministries. He has twice served as president of the Southern Baptist Convention. He has a doctor of ministry degree in church and proclamation from Southwestern Baptist Theological Seminary. He and his wife have three grown children and eight grandchildren. You can find out more at www.jackgraham.org.

Posted by Joan Nienhuis at 6:20 AM