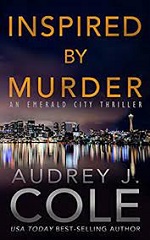 This is the second book I have read in Cole's Emerald City thriller series. It starts out very different in style from the first book in the series. It almost seemed as though it was a novel of dark comedy rather than a mystery/thriller.

Dr. Leroy, a psychiatrist, wants to write a best selling murder mystery. He decides he must murder someone to get his novel right and decides his most irritating patient will be the victim. He plans meticulously but everything goes horribly, or humorously wrong. His first attempt finds him at the wrong house. On his second attempt he gets the house right but terribly bungles the murder.

The plot does get a bit more serious as Leroy kills more people but there is just a different flavor to this novel. There is an odd sense of light heartedness popping up from time to time in a novel about a serial murderer.

I didn't feel this novel was as good as the first in the series, The Recipient. (You can ready my review of it here.) But I am into this series set in Seattle so will read the next soon.