Hell's Half Acre by Jackie Elliott 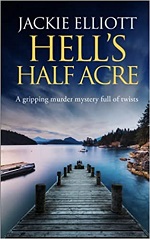 I enjoyed this murder mystery set on the east side of Vancouver Island, B.C. It is the second in a series but reads very well on its own. I was pleased with how Elliott wove backstory from the first novel into the second one. I read the first one but I appreciate refreshing my memory. (You can read my review of Coffin Cove here.)

Andi, a disgraced newspaper reporter who found a job in rural Coffin Cove is our heroine. Rather than being the sole lead, however, a number of the town's residents figure in solving the mystery of a murder, the body only recently found. Inspector Vega of the RCMP is back too. I appreciate the bit of romantic tension between the meddling Andi and the investigating Vega.

This novel delves into the past of Coffin Cove, once a bustling lumber and fishing town. The relationships and events from the past help Andi and others piece together a motive for the initial murder and the ones that follow. The mystery is not so cleverly constructed that readers cannot guess the culprit before revealed in the novel. The strength of this book is the depiction of the characters and the flavor of the town. There is a good amount of action too. Overall, it was a enjoyable novel.