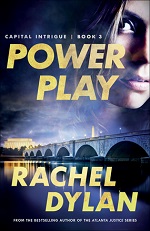 This FBI/CIA romantic suspense novel is a little different in that the heroine, Vivian, is not an agent of one of those agencies. She is, in fact, an attorney at the State Department. She gets caught up in a dangerous operation, however, when she witnesses two ambassadors collapse as if poisoned at a diplomatic dinner in Washington DC. She becomes an essential person in the attempt to determine what happened and who is responsible.

There are two investigations going on by the combined task force. One deals with the death of the Egyptian ambassador and involves Vivian and her past work overseeing the transfer of prisoners, making sure the action was legal regarding international law. The other investigation deals with the death of the U.S. ambassador to Belgium. The two investigations are unrelated except the murders happening at the same dinner. The dual plots helped fill out the character roster and perhaps provided enough material for an entertaining novel when one plot would not have been sufficient.

There is suspense for Vivian as someone wants to either hurt her or kidnap her, related to her previous work in Egypt. There is some romance as she begins to have feelings for the hunk protecting her. One aspect of this plot I really liked was Vivian being asked to take part in a dangerous ploy to get information, something only a trained agent would normally do. That gave depth to Vivian's character and highlighted her bravery.

The other plot is a straightforward investigation and involves no suspense nor romance for the agents involved.

This is a good novel for readers who would appreciate a truly amateur individual being asked to participate in a high level ploy to gather information regarding international intrigue. It is the third book in the Capitol Intrigue series but since each book concentrates on a different character reads well on its own. There is a good representation of Christian faith included.

Rachel Dylan is an award-winning and best-selling author of legal thrillers and romantic suspense. She has practiced law for over a decade, including being a litigator at one of the nation's top law firms. Her Atlanta Justice series has won the Holt Medallion, the Maggie Award, and the FHL Reader's Choice Award. She and her husband live in Michigan. Photo credit: © Erika Aitken Photography.

Posted by Joan Nienhuis at 1:17 PM