The Magna Carta of Humanity by Os Guinness 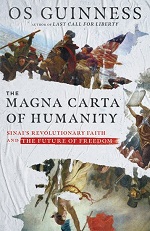 I have mixed feelings about this book. Because this is a book review and not a paper addressing all of the issues in the book, I will only consider the most important concerns I have about the book.

Guinness presents “...the exodus as the precedent and pattern of Western freedom.” (19) The fundamental principles of the Exodus Revolution should be recognized as the Magna Carta of humanity. One of those principles is that man is created in the image of God. “Each individual human is exceptional.” (78) Evil, injustice and oppression “are always to be fought.” (78) I agree.

I have issue with one of his principles, however, that covenant people were equals before the law, in schooling and in worth. (94) Leviticus 27 is clear women were valued less than men. Women were not allowed education in that society. The true Sinai principle of the inequality of women bore fruit in America with women not being allowed to vote for over a century, nor be allowed to engage in higher education or even own property for decades after the nation's founding.

Another problem I find with using Sinai in relation to the founding of America is the role of God. Only the power of God was able to free the Israelites. “Without the intervention of God, there would have been no exodus...” (138) Can Sinai be related to America? God founded a theocracy. The Israelites were given specific instructions for religious action and belief. America was founded on the principle that a religion could not be established by law, nearly opposite the situation at Sinai. The religious aspects of Exodus and 1776 are very different and I think Guinness' argument falls flat.

Guinness defends the American experiment. He acknowledges the evil and hypocrisy of slavery but says if “acknowledged and corrected,” the founding documents stand clear and strong. (22) I was disappointed Guinness failed to recognize and address the repeated slaughter and disenfranchisement of Native Americans. Near the end of this book, Guinness identifies the serious work needed to acknowledge and correct that evil associated with America's founding.

Guinness is, in general, very critical of the progressive left. He does admit, however, that they have reason to be upset. “Many of the injustices and inequalities are genuine, and they require genuine resolution.” (209) It is in how they respond he finds error. At times, his attacks on the left are almost humorous. He writes, “...the attitude of the left is clear: if elections go the wrong way and investigations and impeachments also fail, what is left but assassination?” (35) Ah, but then his draft of this book went to the publisher before the 2020 election and the actions of January 6, 2021. How ironic.

Guinness' book is written in a scholarly fashion and is, perhaps, aimed at scholars rather than those who need to hear and heed his message. He quotes various scholars, historians and authors, people most Americans will not recognize nor care to hear about. He also makes reference to so many political movements and ideas, average Americans may become glassy eyed as they skim over sections of material. Guinness also relies heavily on the work of Rabbi Sacks, former chief rabbi of Great Britain, something evangelical Christians may find puzzling.

I agree with Guinness' conclusion. “For Sinai (and Calvary) America must make amends, and the very real sins must be confessed with very real repentance. But if this happens, the American experiment in freedom may be given a second chance and can then go forward both wiser and more humbly.” (233) Forgiveness is the next essential act to reconciliation and restoration. But, repentance must come first.

I appreciate Guinness' honesty at the role of Christians in creating the current anti-Christian feelings. “All too often, Christian behavior has flatly contradicted Christian beliefs.” (32) “Christians have betrayed their Lord, dishonored their faith and brought down attacks on their own heads...” (32) “Confession, the willingness to acknowledge our sins...is essential today.” (33) Will Christians take the first step of repentance?

All the evils of America, and Guinness admits to the evils from slavery to Vietnam, (basically the entire history of the nation), were egregiously evil. (234) But, he argues, they were contradictions to the ideals of America's founding. Those ideals “should be lifted high so that succeeding generations could aspire to achieve them more faithfully than their ancestors did...” (234)

From my observations of recent activities in the U.S., I would say the ball is in the court of the political right. Will leaders, those in political and religious power, repent of the egregious evils against the Blacks, Native Americans, the disenfranchised, and seek forgiveness and to make amends? Will a visionary leader call for a national acknowledgment of the sins and failures of the past and present and call to recommit to the principles of America's founding? (244) I am waiting.

Os Guinness (DPhil, Oxford) is the author or editor of more than thirty books. A frequent speaker and prominent social critic, he has addressed audiences worldwide from the British House of Commons to the U. S. Congress to the St. Petersburg Parliament. He is a senior fellow at the Oxford Centre for Christian Apologetics and was the founder of Trinity Forum. He was born in China to missionary parents and expelled with many other foreigners in 1951. He traveled to England where he was educated and served as a freelance reporter with the BBC. He came to the U.S. in 1984 and has been a guest scholar or fellow at several institutions. He and his wife currently live in McLean, Virginia.

Thank you for this review. I too am disappointed that along with his failure to recognize the exclusion of women, Guinness doesn't really notice that extraction and enslavement were basic to the power and wealth of both Western Europe and the United States. I can't accept that all we need is a tweaking of the US system. I might call what we need transformation rather than revolution.