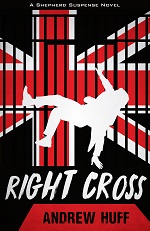 First he left the CIA. Then he left pastoral ministry. Now John Cross has been imprisoned in one of Great Britain's most infamous prisons. Has he reached the end of his rope? Or is this another move in a dangerous spy game?

Christine Lewis, United News Network's rising star television anchor, is determined to find out. But in her pursuit of answers, Christine finds herself at the center of a cyberterrorist plot to alter the balance of power in the world. From the English coastline to the Rocky Mountains, John must partner with the CIA and MI6 in a race against the clock to stop the threat of nuclear war and save the lives of everyone he holds dear.

The concluding story in the Shepherd Suspense trilogy is a globe-trotting, action-packed adventure with threads of biblical truth woven in. Fans of high-octane thrillers will be on the edge of their seats with Right Cross.

I have enjoyed this series featuring John Cross. His character is really unique. He's been a CIA operative but then got saved. He has all the expertise from his CIA training so he can outwit the smartest and worst of the villains. He also has the moral character of a Christian so he refuses to kill anyone. This makes for some tense confrontations.

Huff gives readers a good balance of action and character development. The action revolves around a top hacker who has the evil desire to control some nuclear warheads. This villain has a group of well trained military style men and many advanced offensive devises. John has to be at the top of his abilities to prevent disaster.

The character development comes from previous novels as John is ready to finally allow his growing love for Christine be evident. Just when I thought there would be a lengthy passage of character interaction between the two, bad guys arrive and suspense ensues.

Besides top suspense and touching character interaction, the real strength of this series is the reality of the Christian life John and Christine portray. They think and act and pray like real Christians do. Huff's characterization of Christians is perhaps the most realist in fiction I have seen.

This is a good novel for readers who like international suspense. It is the third and final novel in this series yet reads very well on its own. You can read my reviews of the previous novels: Cross to Kill, Cross Shadow.

You can read and excerpt here and watch the book trailer here.

Andrew Huff is the product director at Igniter Media, one of the largest church media companies in the nation. He has also spent ten years in church ministry as both a youth pastor and creative arts pastor.

He is a two-time finalist in the American Christian Fiction Writers (ACFW) Genesis Contest for unpublished authors (2014, 2017) and also won the best screenplay award at the 2015 48 Hour Film Festival in Richmond, VA.

Huff holds a bachelor of science in religion degree from Liberty University and a master of arts in Christian education from Dallas Theological Seminary. He resides in Plano, TX, with his beautiful wife, Jae, and their two boys. Learn more at www.andrewhuffbooks.com.

Posted by Joan Nienhuis at 8:11 PM