Kill the Noise by Ryan Ries 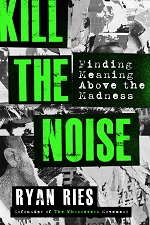 This is quite a prodigal son story. Although the son of a Calvary Chapel pastor, Ries went into a life of partying, music, drugs and sex. He shares many of his experiences and then how he finally got saved as an adult. He writes that his parents were aware of his lifestyle and tried to get him help but he refused. I found it interesting he either ignored childhood Christian influence or was not given any as he later in life did not know where Romans was in the Bible nor who Habakkuk was. (71)

This combination memoir and life lessons book would appeal to young people, people who speak about dudes and cribs and say a friend is dope. This book is for people who don't look like nor worship like traditional Christians and would appreciate Ries writing about Jesus kicking butt.

Unfortunately, Ries says he has no answers as to how he got so far off the rails. (119) So those who hoped to find some parenting advice in this book will be disappointed.

This is a book for young people who think God could not possibly love them or want them. Ries' story of bad behavior and return to faith is a good example of God loving the prodigal back to a relationship with Him. God will not kick you to the curb if you mess up, Ries says. “Whenever you turn back to God, He will be there waiting for you with open arms of forgiveness and acceptance.” (35)

Ryan Ries is cofounder of The Whosoevers movement, a nonprofit organization that empowers students at public schools, colleges, and universities around the world to make positive choices no matter their circumstances. Ryan teaches Bible studies at Calvary Chapel Golden Spring, and speaks to thousands of teens and adults at music festivals, concerts, skate parks, churches, juvenile detention centers, and rehabs each year. He produces films, organizes music festivals, and hosts a Saturday night radio talk show, The Ryan Ries Show. Ryan continues to work personally with musicians and action sports athletes. Ryan is married to Crystal, and they have triplet daughters and one son. They live in Southern California.

Posted by Joan Nienhuis at 9:16 AM