A Solitude of Wolverines by Alice Henderson 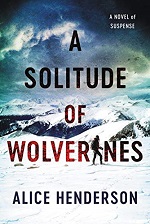 This is the first book in the Alex Carter biologist series and the first I have read by Henderson. I generally enjoyed the novel set in the snowy Montana mountains. I like the idea of a different kind of heroine, one committed to protect endangered special. I learned much about wolverines and got a good idea of the Montana setting too.

Really, what kind of nonprofit would send a biologist up in the mountains without a satellite phone? It makes for good suspense, Alex up in the dangerous mountains with no way of communicating when the bad guys come after her. But is it realistic?

This is an interesting novel for readers who like to learn about wild animals and efforts to preserve them and their habitat. The plot flows well and there is a good deal of suspense. I'll overlook the lapses in judgment by Alex and will be reading the next in the series.

Alice Henderson is a dedicated wildlife researcher, doing wildlife surveys in areas set aside for conservation. She has written a number of novels, some for media-tie in and for movies. She has also written material for several Star Wars video games. She was selected to attend Launchpad, a NASA-funded writing workshop aimed at bringing accurate science to fiction. She holds an interdisciplinary master's degree. You can find out more at www.AliceHenderson.com.