You Only Live Once by Haris Orkin 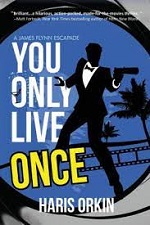 The name is Flynn, James Flynn. What a romp. James, a patient at a mental hospital, thinks he's the next James Bond, agent of His Majesty. Escaping his confines, he manages to get into all kinds of adventures, many deadly situations he manages (by accident) to survive, including a mobster's grand plan. Exciting car chases. Amazing escapes. Heroic actions. Humor. This novel has it all.

Flynn is a character. Orphaned young, bullied, he grew up on James Bond movies and the like. He became his alternate persona to survive. And survive he does, thanks to all of the daring moves he has learned from the movies. He has a deep sense of of the seriousness of his task. Flynn says of himself and his sidekicks, “The fate of the world is in our hands.” (2948/5474)

The only thing I did not like about this novel was the language. There is more swearing and gross comments in this novel than I never want to read. They are appropriate to the characters, however. That aside, action galore, great characters, a ton of humor, this is a fun read, except for the language, that is. Readers who like Janet Evanovich will like Orkin.

Haris Orkin is a novelist, a playwright, a screenwriter, and a game writer. His play, Dada was produced at The American Stage and the La Jolla Playhouse. Sex, Impotence, and International Terrorism was chosen as a critic’s choice by the L.A. Weekly and sold as a film script to MGM/UA. Save the Dog was produced as a Disney Sunday Night movie. His original screenplay, A Saintly Switch, was directed by Peter Bogdanovich and starred David Alan Grier and Vivica A. Fox. He is a WGA Award and BAFTA Award nominated game writer and narrative designer known for Command and Conquer: Red Alert 3, Call of Juarez: Gunslinger, Tom Clancy’s The Division, Mafia 3, and Dying Light.