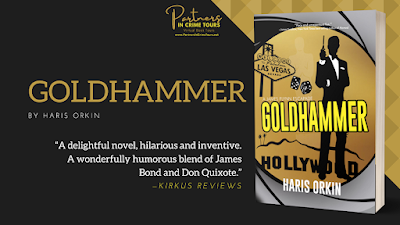 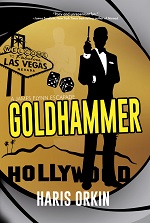 A young actress, involuntarily committed to City of Roses Psychiatric Hospital, plunges James Flynn into a dangerous new adventure when she claims one of the most powerful producers in Hollywood is trying to kill her.

Still convinced he's a secret agent for Her Majesty's Secret Service, Flynn springs into action, helps her escape and finds himself embroiled in a battle with a dangerous sociopath worth billions. In the process, he uncovers a high-tech conspiracy to control the mind of every human being on Earth.

With the help of his reluctant sidekick, Sancho, and a forgotten Hollywood sex symbol from the 1960s, Flynn faces off with Goldhammer and his private army in a desperate attempt to save the young actress...and save the world...once again.

"One of those books that has you laughing and turning pages well into the night.” —Len Boswell, Bestselling author of The Simon Grave Mysteries

“A fast-paced quixotic thriller that would make Miguel de Cervantes and Ian Fleming proud. The third James Flynn novel is a powerful cocktail of suspense, adrenaline and a whole lot of laughs. Orkin has the remarkable ability to keep the reader straddled between a genuine spy thriller and an off-the-wall comedy” —Joe Barret, Award-winning author of Managed Care

This is an entertaining novel for readers who like a humorous twist on the super spy character. Flynn is a character. He is crazy enough to get into all kinds of adventures. He is skilled enough, having read spy novels and watched movies, he manages most of the time to foil his enemies. Some of the scenes are humorous while others are outlandish. The fight scenes are a riot. I was amazed at how many times he survived when there was no way out. It's amazing that Flynn once again stumbles into an opportunity to save humanity from a greedy and powerful villain.

My favorite quote in the book: “Mr. Flynn, I've amassed many enemies in my rise, but you have proven to be the most dogged and unrelenting opponent I have ever encountered. I'm guessing that's because your elevator does not go all the way to the top.” (2805/3575)

Not only will be treated to an entertaining faux 007, you'll receive some insightful thoughts on advertising and brainwashing. There is some foul language and verbal phrases I would rather have never read but that aspect of the narrative is really toned down from the first novel in this series. There are some raunchy parts, examples of what bad guys say and do. I just tried to ignore those parts. I did find the bits of history at the beginning of every chapter interesting.

You can read my review of the first book in the series: You Only Live Once.

The Corsican wanted him dead.

Of that James Flynn was certain.

Somehow, the assassin had infiltrated Her Majesty’s Secret Service as a security officer. Flynn didn’t recognize him at first. The killer had put on a few pounds and likely had plastic surgery, but what he couldn’t disguise were his eyes. His cold, dark, pitiless eyes. The eyes of a sociopath. The eyes of an executioner.

The only question was when.

When would the Corsican come for him?

He told his colleagues what he suspected, but they refused to believe him. They claimed his name was Thomas Hernandez and that someone else on the security team had recommended him. They also said they fully vetted him. But Flynn wasn’t fooled. He tangled with the Corsican before. The man was relentless. A cold-blooded enforcer who started with the Corsican mafia but went on to do contract hits for the Sicilians, the Albanians, the Serbians, and the Russians.

Instead of waiting for the Corsican to come to him, Flynn decided to flush him out. Force his hand. Expose him for who he was and why he was there.

Flynn dressed in black denim and a black turtleneck and waited until 2 a.m. to make his move. He kept to the shadows as he trod the deserted corridors. He had no weapon since lethal weapons of any kind were now forbidden at headquarters. A foolish rule put in place by sheltered bureaucrats who had no clue. Luckily, not even security could carry a firearm at headquarters. All the Corsican had was an expandable baton and a Taser. Even so, the man was lethal enough with just his hands and feet.

But then, so was Flynn.

Flynn heard footsteps ahead and ducked into a conference room. He waited and listened as the footsteps drew closer. As they passed the doorway, Flynn peered into the corridor to see the Corsican lumbering forward, quietly peering in room after room. Suddenly, he stopped. Flynn felt a jolt of adrenaline. The air was electric. The silence palpable. Could the Corsican feel Flynn’s eyes on him? Flynn knew that scientists have identified a specialized group of neurons in the primate brain that fire specifically when a monkey is under the direct gaze of another. Humans also appear to be wired for that kind of gaze perception. Predators like Flynn and the Corsican can also be prey and have developed a sixth sense to alert them to danger.

The Corsican turned and he and Flynn locked eyes for a moment. Before the hit man could take a step, Flynn took off down the hall in the opposite direction. He heard the footfalls of the Corsican as he chased after him. Flynn had his route all mapped out. Darting down one corridor. Then another. Running until he arrived at a door that led down to the basement and the guts of the building. Flynn had picked the lock after dinner, knowing that this was the night he would lure the Corsican to his end. He had a license to kill and could have used it anytime, but Flynn didn’t exercise that power willy-nilly. Only as a last resort. He didn’t want the Corsican dead. He needed to know who put the price on his head. Otherwise who ever hired the killer would continue to send hitters until finally one succeeded.

The building that housed HMSS was huge and had a substantial infrastructure. The basement utility plant had mechanical, electrical, HVAC, and plumbing systems that fed water, air, and electricity all through the facility. Flynn moved from massive room to massive room, staying just ahead of the Corsican. He needed to lose him and lay in wait. Flynn was confident in his abilities, but to come at a killer like that head-on didn’t make much sense. Why give your opponents any edge at all?

Flynn ducked into a room that housed all the electrical panels, distribution boards, and circuit breakers. Conduit snaked everywhere and Flynn found a metal door secured with a heavy padlock. Using two straightened paper clips, he quickly picked the lock. The door led to an outside area protected by a chain-link fence topped with razor wire. The security fence surrounded three giant transformers and two massive backup generators the size of semi-trailers.

Flynn stood next to the door and strained his ears to hear approaching footsteps over the electrical buzz of the transformers. Faint at first, they moved closer. Careful. Slow. Stealthy. He saw a shoe as someone came through and Flynn took them from behind, using jiu-jitsu to slam them into the ground.

“Whoa, whoa, whoa,” said the man Flynn had face down in the gravel.

Flynn released his comrade-in-arms and helped him to his feet. Bits of gravel still clung to his face. “I thought you were the Corsican.” Flynn’s British accent had a touch of Scottish burr.

“His name is Hernandez,” Sancho said.

“That’s not his real name.”

“And I’m telling you, he’s not the Corsican.”

“Then why’d he call me? He knows I know you. He knows we’re friends. He asked me to find you. Talk to you. Calm you down.”

“Perhaps he wants to take care of you too.”

Flynn heard the Corsican call to them, his voice deep and resonant. “You okay in there, brother?”

The Corsican walked in with two other men. All three wore the blue security uniform issued to those who guard HMSS. The Corsican looked at Flynn with his dark, merciless eyes. “You okay, Mr. Flynn?”

“Tell them who you are,” Flynn demanded.

“Who you really are.”

The Corsican rolled his eyes and sighed. “That’s who I really am.”

Flynn aimed an accusatory finger. “I know who you are. Born Stefanu Perrina in Porto, Corsica. Contract killer for the Unione Corse, the Cosa Nostra, and the Russian mafia. Wanted by Interpol for fifty-two confirmed kills.”

“I was born in Hacienda Heights.”

Flynn glanced at Sancho. “The man is a master of deception. It’s kill or be killed with men like him.”

The Corsican drew his Taser and the other two guards followed suit.

Sancho raised his hands. “Whoa, come on now. Easy.” He stepped in front of Flynn as the Corsican fired. The Taser darts caught Sancho in the shoulder and socked him with fifty thousand volts. He screamed in agony as his whole body seized up and shook. His legs gave out and he fell on his side, helpless and twitching.

Flynn dove behind a generator before the other two guards could fire. Each guard stalked him from a different side. Flynn clambered up over the top and launched himself from above, tackling the Corsican. He wrenched away his reloaded Taser and shot one of the guards in the crotch. The man went down with a shriek as the other guard fired on him. Flynn fell to his knees and the darts parted his hair before hitting the Corsican in the chest. The killer crumpled as Flynn sprang to his feet and pulled the Corsican’s expandable baton out of its holster. Flicking his wrist, Flynn fully extended the menacing club and turned to confront the last standing guard.

Someone grabbed Flynn by the arm and Flynn elbowed him in the face. Sancho staggered back, holding his bloody nose. “What the hell, man?”

Flynn heard a Taser fire and an instant later, two darts hit him in the side. Fifty thousand volts took him to his knees as another guard fired another Taser. Those two darts hit him in the stomach. Flynn lost control of every muscle in his body. And then he saw the Corsican looming over him with his own weapon. He shot the darts directly into Flynn’s chest. Right over his heart. Now all three lit him up with electricity. One hundred and fifty thousand volts rocked Flynn as they shocked him with charge after charge until the world faded into a tiny aperture that slowly began to close.

Haris Orkin is a novelist, a playwright, a screenwriter, and a game writer. His play, Dada was produced at The American Stage and the La Jolla Playhouse. Sex, Impotence, and International Terrorism was chosen as a critic’s choice by the L.A. Weekly and sold as a film script to MGM/UA. Save the Dog was produced as a Disney Sunday Night movie. His original screenplay, A Saintly Switch, was directed by Peter Bogdanovich and starred David Alan Grier and Vivica A. Fox. He is a WGA Award and BAFTA Award nominated game writer and narrative designer known for Command and Conquer: Red Alert 3, Call of Juarez: Gunslinger, Tom Clancy’s The Division, Mafia 3, and Dying Light.

This is a giveaway hosted by Partners in Crime Tours for Goldhammer by Haris Orkin. See the widget for entry terms and conditions. Void where prohibited.

Posted by Joan Nienhuis at 5:27 AM

Thanks for the review. Sounds like a crazy fun read!