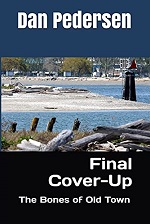 I have read three of Pedersen's mysteries taking place on Whidbey Island and I think this is the best one yet. Over a decade ago, as the downtown street of Oak Harbor was being reconfigured, bones were uncovered. It turns out some of the downtown area had been a burial ground for local Native Americans in centuries past.

Pedersen takes the concept farther, developing a plot where a sink hole occurs in downtown. Bones of two bodies are revealed, a male and a female. It turns out they were not Native American. They had been shot, execution style. The mystery goes back to 2008 and it takes a good deal of work for Kat, a sheriff's deputy, to solve the case.

While this is a good mystery, what I liked best about the book was its information about Whidbey Island. The murdered man was an environmentalist. Pedersen does a good job in exploring the tension on Whidbey in years past regarding development and the environment. There is interesting information about Oak Harbor and the changes brought on by the arrival of the naval air station. As Oak Harbor grew, part of marshy land near the shore was filled in and built upon. I learned that Freund's Marsh, the remaining part of that area, is a buffer, filtering run off before it seeps into Oak Harbor Bay. And that is just a little of the interesting information in the book.

Readers interested in a unique setting, Whidbey Island, and a good mystery will enjoy this book.

Dan Pedersen (1947-2021) was born in Mount Vernon, WA, and moved to Whidbey Island in 1986. He received a master's degree in journalism from the University of Washington. He served in the Air Force during the Vietnam era, including time at Mountain Home, Idaho. He then worked for a number of newspapers. Most of his career centered on a marketing magazine, and a newsletter and many annual reports for Safeco Corporation. He retired from a corporate career in 2002, writing material for Island County Marine Resources Committee. He wrote a blog and self published several books on family history and rural living and began a mystery series. There are ten mysteries in all, many taking place on Whidbey Island. You can read past contributions to Pedersen's informative blog here. You can read more about his career and a tribute to him here.

Posted by Joan Nienhuis at 3:45 PM