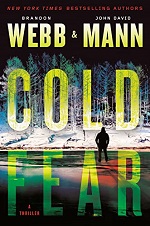 Disgraced Navy SEAL Finn is on the run. A wanted man since he jumped ship from the USS Abraham Lincoln, he’s sought for questioning in connection to war crimes committed in Yemen by a rogue element in his SEAL team. But his memory of that night—as well as the true fate of his mentor and only friend, Lieutenant Kennedy—is a gaping hole.

Finn learns that three members of his team have been quietly redeployed to Iceland, which is a puzzle in itself; the tiny island nation is famous for being one of the most peaceful, crime-free places on the planet.

His mission is simple: track down the three corrupt SEALs and find out what really happened that night in Yemen. But two problems stand in his way. On his first night in town a young woman mysteriously drowns—and a local detective suspects Finn’s involvement. What’s worse, a SEAL-turned-contract-killer with skills equal to Finn’s own has been hired to make sure he never gets the answers he's looking for. And he's followed Finn all the way to the icy north.

This is the second novel in an exciting rogue military agent series. The first book is called Steel Fear and should really be read first to understand what happens in this novel. You can read my review of Steel Fear here.

Finn is on his own mission to find out who really did the massacre he is accused of doing. Iceland is a unique location for a novel like this and I found it particularly interesting. Webb and Mann have done a good job of immersing readers in the climate and culture of the country.

The authors have done a good job crafting Finn as an able hero. He gets into all kinds of suspenseful situations while chasing the truth of his past. We get a good dose of the kind of training SEALS endure, providing Finn with the ability to foil his attackers. He's a one man army. He comes under the scrutiny of a local police detective and he tries to help her solve a murder while keeping his real identity and mission secret.

The plot is quite complex with secret agents, rogue agents, and a person with a new way to threaten the world. It is not until near the end of the novel that all of the mysterious events come together to a suitable resolution. In the meantime, we get a good dose of how governments work, covering up errors to their own benefit and pressuring potential harm for acquiescence in further action.

I enjoyed this engaging novel once I got into it a bit and began to understand Finn's mission in Iceland. Readers will find this situation suitably handled but with Finn on the way to his next adventure.

Brandon Webb left home at sixteen to become a Navy SEAL. He completed four deployments to the Middle East. One of his many experiences was working as a SEAL sniper course manager. He was awarded several medals. He ended his military career early to spend more time with his family and focus on business. His digital media company has created hit TV shows, books and an award-winning documentary. He is the New York Times bestselling author of nonfiction, now focusing on a thriller series. You can find out more at https://brandontylerwebb.com/.

John David Mann began creating careers as a teenager. He had a successful career as a concert cellist and prize-winning composer. He founded a journal on health and environmental issues and built a multimillion-dollar sales/distribution organization. He is the author of more than thirty books and has won numerous awards. He has logged in hundreds of hours of interviews with U.S. military personnel and their families and friends. You can find out more at https://johndavidmann.com/.

Posted by Joan Nienhuis at 9:27 AM