Below the Fold by R G Belsky Blog Tour 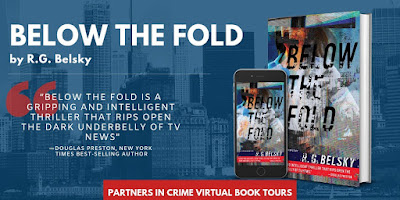 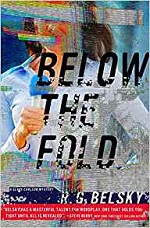 Every human life is supposed to be important. Everyone should matter. But that’s not the case in the cutthroat TV news-rating world where Clare Carlson works. Sex, money, and power sell. Only murder victims of the right social strata are considered worth covering. Not the murder of a “nobody.”

So, when the battered body of a homeless woman named Dora Gayle is found on the streets of New York City, her murder barely gets a mention in the media. But Clare―a TV news director who still has a reporter’s instincts―decides to dig deeper into the seemingly meaningless death. She uncovers mysterious links between Gayle and a number of wealthy and influential figures. There is a prominent female defense attorney; a scandal-ridden ex-congressman; a decorated NYPD detective; and―most shocking of all―a wealthy media mogul who owns the TV station where Clare works. Soon there are more murders, more victims, more questions. As the bodies pile up, Clare realizes that her job, her career, and maybe even her life are at stake as she chases after her biggest story ever.

I enjoyed this second novel in the series featuring an award winning journalist now TV news director. The style of the plot is police procedure but features an amateur sleuth. The construction of the plot is complex as a link must be found between the murders of a homeless woman and a high power investor. Clare, our amateur sleuth, methodically works on solving the mysteries and I was never confused as additional information was revealed. Clare is a well developed character having her own personal issues. Her dealing with those issues is woven into the plot, making for a good balance of plot and character developments. Belsky also does a good job of portraying the work of reporters and the atmosphere in the TV news structure, reflecting his own experiences in the news business.

This is a good novel for mystery lovers who enjoy working through a complex but well organized plot. There are a few twists near the end that wrap up the entire case. Belsky has also left us wanting to know what Clare's next move is as she takes a step into the past to find her future.

OPENING CREDITS
THE RULES ACCORDING TO CLARE
Every human life is supposed to be important, everyone should matter. That’s what we all tell ourselves, and it’s a helluva noble concept. But it’s not true. Not in the real world. And certainly not in the world of TV news where I work.
Especially when it comes to murder.
Murder is a numbers game for me. It operates on what is sometimes cynically known in the media as the Blonde White Female Syndrome. My goal is to find a murder with a sexy young woman victim to put on the air. Sex sells. Sex, money, and power. That translates into big ratings numbers, which translates into more advertising dollars. These are the only murder stories really worth doing.
The amazing thing to me is not that there is so much news coverage of these types of stories. It’s that there are people who actually question whether they should be big news stories. These critics dredge up the age-old argument about why some murders get so much more play in the media than all the other murders that happen every day.
I don’t understand these people.
Because the cold, hard truth—and everyone knows this, whether they want to admit it or not—is that not everybody is equal when it comes to murder.
Not in life.
And certainly not in death.
It reminds me of the ongoing debate that happens every time Sirhan Sirhan—the man who killed Robert F. Kennedy—comes up for a parole hearing. There are those who point out that he’s already served fifty years in jail. They argue that many other killers have served far less time before being paroled. Sirhan Sirhan should be treated equally, they say, because the life of Robert F. Kennedy is no more or less important than the life of any other crime victim. Me, I think Sirhan Sirhan should be kept caged up in a four-foot by six-foot cell as long as he lives—which hopefully will be to a hundred so he can suffer every minute of it. For God’s sakes, people, he killed Robert—freakin’—Kennedy!
And so, to those who think that we in the media make too big a deal out of some of these high-profile murder stories, I say that’s completely and utterly ridiculous. I reject that argument completely. I won’t even discuss it.
* *
Now let me tell you something else.
Everything I just said there is a lie.
The truth is there really is no magic formula for murder in the TV news business. No simple way to know from the beginning if a murder story is worth covering or not. No easy answer to the question of how much a human life is worth—or what the impact will be of that person’s death by a violent murder.
When I started out working at a newspaper years ago, I sat next to a veteran police reporter on the overnight shift. There was an old-fashioned wire machine that would print out police slips of murders that happened during the night. Most of them involved down-market victims in bad neighborhoods whose deaths clearly would never make the paper.
But he would dutifully call the police on each one and ask questions like: “Tell me about the body of that kid you found in the Harlem pool room—was he a MENSA candidate or what?” Or, “The woman you found dead in the alley behind the housing project—any chance she might be Julia Roberts or a member of the British Royal Family?”
I asked him once why he even bothered to make the calls since none of these murders seemed ever worth writing about in the paper.
“Hey, you never know,” he said.
It was good advice back then, and it still is today. I try to teach it to all my reporters in the TV newsroom that I run now. Check every murder out. Never assume anything about a murder story. Follow the facts and the evidence on every murder—on every crime story—because you can never be certain where that trail might take you.
Okay, I don’t always follow my own advice in the fast-paced, ratings-obsessed world of TV news where I make my living.
And usually it does turn out to be just a waste of time.
But every once in a while, well . . .
Hey, you never know.
***
Excerpt from Below The Fold by R.G. Belsky. Copyright © 2019 by R.G. Belsky. Reproduced with permission from R.G. Belsky. All rights reserved.

R. G. Belsky is an author of crime fiction and a journalist in New York City. His newest mystery, Below The Fold, is being published in May 2019 by Oceanview. It is the second in a series featuring Clare Carlson, the news director for a New York City TV station. The first Clare Carlson book, YESTERDAY'S NEWS, came out in 2018. Belsky previously wrote the Gil Malloy series - THE KENNECONNECTIONION, SHOOTING FOR THE STARS AND BLONDE ICE - about a newspaper reporter at the New York Daily News. Belsky himself is a former managing editor at the Daily News and writes about the media from an extensive background in newspapers, magazines and TV/digital news. He has also been a top editor at the New York Post, Star magazine and NBC News. Belsky won the Claymore Award at Killer Nashville in 2016. He has finished as a Finalist for both the Silver Falchion and David Awards. And his first Clare Carlson book, YESTERDAY’S NEWS, was named Outstanding Crime/News Based Novel by Just Reviews in 2018 and was a Finalist for Best Mystery of 2018 in the Foreword INDIES Awards. His previous suspense/thriller novels include LOVERBOY and PLAYING DEAD. Belsky lives in New York City.


Visit these other great hosts on this tour for more great reviews, interviews, guest posts, and giveaways!
Click here to view the Below The Fold by R.G. Belsky Participants

Thanks for the review - and telling people about my new book! - R.G. Belsky

I'm really enjoying this series and looking forward to the next book!