Murder in the City of Liberty by Rachel McMillan 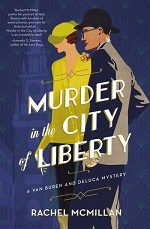 I had difficulty reading this novel. I was confused by the beginning, starting with Luca. I remember wondering who Luca was when this novel was about deLuca. That chapter would have better been placed later, after identifying the relationship between those cousins.


Then there was an immediate introduction of a number of characters from the previous novel. The back story of their involvement in that novel was reviewed but I was at a loss until about a third of the way into the book as to how they figured in this one.

I did not find the main characters engaging. Someone mentions to Hamish about traveling from Boston to Cincinnati, for example. “Hamish knew nothing about American geography. 'Is that far?'” (1319/3875) I don't mind a bumbling hero but I don't like a stupid one. I just never found anything engaging about Hamish. Reggie seemed like a foolhardy woman to me. I did not find her decisions to pursue a vague sense of adventure endearing. The relationship between the two of them seemed to be the focus of the novel. I would have rather had the focus be the cases Hamish was working on with the romance/friendship tension a side issue.

I did appreciate learning a bit about minor league baseball in the 1930s as well as the housing situation in Boston.

This is not a stand alone novel. One must have read the first in the series and I would suggest having read it very recently. Potential readers would need to be satisfied with a plot heavy on relationship issues rather than sleuthing.

You can read my three star review of the first book in the series, Murder at the Flamingo, here.

Rachel McMillan is a history enthusiast, lifelong bibliophile, and author of the Herringford and Watts series. When not reading (or writing), she can be found at the theater, traveling near and far, and watching far too many British mysteries. She lives in Toronto where she works in educational publishing and is always planning her next trip to Boston.

I received a complimentary egalley of this book from the publisher. My comments are an independent and honest review. I read an ARC and the quote I noted in my review may have changed in the final edition of the book.
Posted by Joan Nienhuis at 6:58 AM