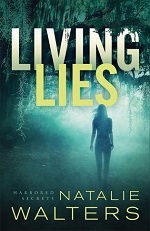 I was pleasantly surprised by this debut romantic suspense novel. Walters tackled a few serious issues and did a good job of it. The main issue is depression, something Lane, the main female character experienced. She struggled with feelings of not being stable enough to take a chance on romance. We hope Charlie, the new deputy in town, is willing to understand and be the support Lane needs.

Other issues in the novel include PTSD, guilt and the pressures put on a family when a powerful judge is running for the senate. That pressure just might include lying about the past so nothing can darken the judge's pristine reputation.

The book starts out with the body of a murdered teen discovered by Lane and our handsome deputy is on the case. The plot is rather complex and is balanced with lots of character revelation. Much of the inner thoughts are Lane's as she struggles with her depression.

This is a good debut effort. I recommend it to readers who enjoy a complex but good plot, some suspense, and a good deal of character concentration.

Natalie Walters is an Army wife and mother of three adult children. She began her writing journey in 2010. Her nonfiction pieces have appeared in Proverbs 31 magazine and Guideposts online. She and her husband are currently stationed in Hawaii. You can find out more at https://www.nataliewalterswriter.com/

I received a complimentary egalley of this book from the publisher. My comments are an independent and honest review
Posted by Joan Nienhuis at 8:27 PM