God In His Own Image by Syd Brestel 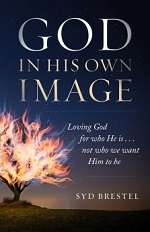 Brestel begins his discussion with Romans 11:22. Paul wrote of the kindness and severity of God, seemingly opposite character traits. He notes that modern Christianity has diminished God's harsher attributes. We may want a kinder and gentler God but He does not conform to who we think He should be.

Brestel reminds us that it is very important, a matter of life and death, to get right what God is like. God has revealed Himself as both severe in His holiness and gentle in His compassion. We are not free to create Him in our own image. He addresses issues like whether God is unfair and how God shows His anger over injustice.

Brestel includes a survey of other gods in other religions. He uses the experiences of Moses to show how God reveals His character. He also writes of how we are to relate to God. Plently of questions are included for discussion.

Brestel's writing style is not academic and is aimed at laypeople. He writes much about his own life and experiences. I found out he is an introvert, has been married to his wife for over 52 years, where he got his theological education, where he pastored, that he flew to Mumbai, and more. The personal aspect of the book felt more like I was having coffee with the author rather than reading a book by him. This book may appeal to older readers because of it.

I appreciate Brestel encouraging readers to accept God as He is revealed in Scripture. The book is not academic in style and may appeal to laypeople.

Syd Brestel (BA, Moody Bible Institute; MA, Western Seminary) is a retired pastor who served a number of congregations for nearly fifty years. He has taught Bible classes at Kilns College in Bend, Oregon. He has ministered in several countries and is passionate about creating opportunities for lay people to receive biblical and theological training.

I received a complimentary egalley of this book from the publisher. My comments are an independent and honest review.
Posted by Joan Nienhuis at 1:55 PM