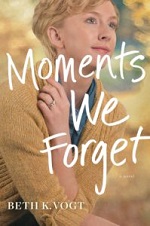 Jillian Thatcher has spent most of her life playing the family peacemaker, caught in the middle between her driven, talented older sister and her younger, spotlight-stealing twin sisters. Then on the night of her engagement party, a cancer diagnosis threatens to once again steal her chance to shine. Now, Jillian’s on the road to recovery after finally finishing chemo and radiation, but residual effects of the treatment keep her from reclaiming her life as she’d hoped. And just when her dreams might be falling into place, a life-altering revelation from her husband sends her reeling again. Will Jillian ever achieve her own dreams, or will she always be “just Jillian,” the less-than Thatcher sister? Can she count on her sisters as she tries to step into a stronger place, or are they stuck in their childhood roles forever?

This is the second in a series of three novels covering the stories of sisters. Jillian is the middle sister, the one frequently ignored or otherwise discounted. She was diagnosed with breast cancer in the first novel. We follow her experiences in marriage and other relationships in this novel.

Several relationship issues are covered in this story. The biggest one is adoption. Jillian wants to adopt while her husband is adamantly against it. Relating to this issue is the healing of past hurts. Both Jillian and her husband must work through pain they still carry from childhood experiences if their marriage is to thrive.

None of the sisters was a Christian at the beginning of the series. Two of the sisters had (part time) live in boyfriends, something unusual in “Christian” fiction. I am glad to see that changing as one of those sisters has become a Christian. There seemed to me to be lots of bickering and disagreements between the sisters and within the other relationships. I got kind of tired of reading those exchanges.

As with the first novel, the point of view frequently changes. Jillian's experiences are told in first person while the rest of the narrative is third person. These points of view sometimes change within a chapter and I found it disconcerting.

Even though Vogt's writing style is not my favorite, I am looking forward to the last novel in the series. The remaining sister whose story needs to be told is the oldest and the most forceful. I want to see how Vogt cracks her tough shell to be open to the gospel.

Beth K. Vogt is a nonfiction author and editor who said she’d never write fiction. She’s the wife of an Air Force family physician (now in solo practice) who said she’d never marry a doctor—or anyone in the military. She’s a mom of four who said she’d never have kids. Now Beth believes God’s best often waits behind the doors marked “Never.” A women’s fiction novelist, Beth’s first novel for Tyndale House Publishers, Things I Never Told You, released May 2018.

Beth is a 2016 Christy Award winner, a 2016 ACFW Carol Award winner, and a 2015 RITA® finalist. Her 2014 novel, Somebody Like You, was one of Publishers Weekly’s Best Books of 2014. A November Bride was part of the Year of Wedding series by Zondervan. Having authored nine contemporary romance novels or novellas, Beth believes there’s more to happily-ever-after than the fairy tales tell us.

An established magazine writer and former editor of the leadership magazine for MOPS International, Beth blogs for Novel Rocket and also enjoys speaking to writers’ groups and mentoring other writers. She lives in Colorado with her husband, Rob, who has adjusted to discussing the lives of imaginary people, and their youngest daughter, Christa, who loves to play volleyball and enjoys writing her own stories. Connect with Beth at bethvogt.com.


“A sister is like yourself in a different movie, a movie that stars you in a different life.”
Deborah Tannen (1945-), sociologist
I’m launching Moments We Forget, book two in the Thatcher Sisters series, and I’ve just turned in the final book in the series. I’d love to share book three’s title with you, but I don’t know what it is. (Of course, book three might have a final title by the time you read this—that’s part of the fun of prerelease deadlines.)
One thing I do know: the theme of “Little Women gone wrong” is woven through all of the books . . . thanks to the Thatcher sisters: Payton, Pepper, Jillian, and Johanna.
Sisters, be they real or imaginary, can be complicated.
Of course, there are sisters who have close relationships. They “get” each other and love doing life together.
But then there are the sister relationships that are like mismatched socks. Or those expensive jeans you loved in the store, but when you bring them home, they never quite live up to those moments in the dressing room.
Such are the Thatcher sisters. Johanna, Jillian, Payton, and Pepper grew up in the same family. They’re all tall. They love Broncos football and board games. But in so many ways their lives are like different movies because they each made different choices. Choices that changed and separated them. Moments We Forget continues to explore whether the Thatcher sisters can find a way to understand each other enough to bridge the distance between them.

Livin’ Lit, May 7
Book Reviews From an Avid Reader, May 7
The Power of Words, May 7
Among the Reads, May 8
Carpe Diem, May 8
Quiet Quilter, May 8
Wishful Endings, May 9
Quiet Quilter, May 9
Christian Chick’s Thoughts, May 9
Simple Harvest Reads, May 10 (Guest post from Mindy Houng)
Remembrancy, May 10
God’s Little Bookworm, May 11
Just the Write Escape, May 11
Spoken from the Heart, May 12
Splashes of Joy, May 12
Truth and Grace Homeschool Academy, May 12
Through the Fire Blogs, May 13
Genesis 5020, May 13
By The Book, May 13
Bigreadersite, May 14
A Baker’s Perspective, May 14
Abba’s Prayer Warrior Princess, May 14
Pause for Tales, May 15
Moments, May 15
Stephanie’s Life of Determination, May 15
All-of-a-kind Mom, May 16
Happily Managing a Household of Boys, May 16
Texas Book-aholic, May 16
janicesbookreviews, May 17
Living Life Free in Christ, May 17
To Everything A Season, May 17
Real World Bible Study, May 18
Older & Smarter?, May 18
A Reader’s Brain, May 18
Inklings and notions, May 19
Hallie Reads, May 19
Locks, Hooks and Books, May 19
Godly Book Reviews, May 20
The Becca Files, May 20
Debbie’s Dusty Deliberations, May 20

I received a complimentary egalley of this book through Celebrate Lit. My comments are an independent and honest review. The rest of the copy of this post was provided by Celebrate Lit.
Posted by Joan Nienhuis at 3:57 AM

This sounds unusual, and very good!

I read several of Beth's early books, but none recently. I love a good family drama.

I appreciate you taking the time to give us a great book description and giveaway as well. Thank you so much!