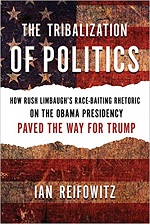 I had no idea. I quit listening to talk radio decades ago, after the elimination of the Fairness Doctrine in 1987. I knew that commentators could speak without concern for political balance but I had no idea how ugly it had gotten. Reading this book about Rush Limbaugh opened my eyes.

Rush has been very important in defining conservative thought and ideology. According to Reifowitz, this was done by race baiting, twisting facts, telling outright lies, editorializing, and similar behavior. He came to this conclusion be reviewing the transcripts of Rush's shows during the eight years of the Obama administration. Rush helped set the stage for Trump and his appeal to racially resentful and alienated whites.

I was shocked at the statements Limbaugh made, documented by Reifowitz and compared with facts. At one point Reifowitz says Limbaugh has an “impressive” level of dishonesty. (2295/3082) Rush certainly created the atmosphere of repeatedly telling lies, a role model for the current administration.

I read this book as part of my ongoing attempt to understand the 2016 presidential election. It gave me more insights into how conservatives felt going into the election and how they got there.

Ian Reifowitz is a professor of history at Empire State College of the Sate University of New York. He has a PhD in history from Georgetown University. He is a contributing editor to the Daily Kos and his articles have appeared in a number of publications. You can find out more at http://ianreifowitz.com/ .

I received a complimentary egalley of this book from the publisher. My comments are an independent and honest review.
Posted by Joan Nienhuis at 6:39 AM