At Any Cost by Andrea Kane Blog Tour 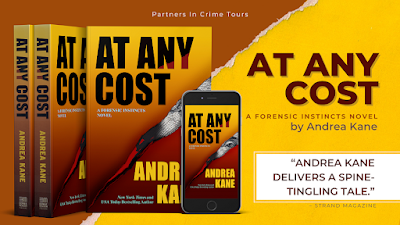 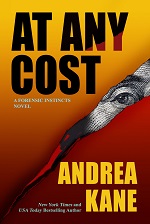 Aimee Bregman had the perfect life. She had an enviable job as head of marketing for an up-and-coming CBD-infused beer that was taking the tri-state area by storm. She had cultivated a massive social media following that showcased the beer at college campus parties and alumni events―and had fun doing it. She had an attentive, steady boyfriend and friends who believed in her. Everything was going right.

But when her long-time mentor, Rita, sets up a business meeting with an important influencer―her life crashes all around her. The casual meeting over drinks suddenly devolves into a shouting match between all parties, and any chance of a new business relationship is over before it begins. Hours later, when the NYPD shows up at Aimee's apartment, questioning her about Rita's abrupt disappearance―foul play suspected―Aimee realizes she's in way over her head.

Fearing that Rita has been murdered, and that she may be next, Aimee hires Forensic Instincts to keep her safe and figure out what's really going on.

Forensic Instincts, a brilliant investigative firm who walks the fine line between legal and illegal, solves challenging and high-profile cases when the bureaucratic restrictions imposed on law enforcement get in the way of achieving results. But neither Aimee nor Forensic Instincts realize how ruthless, how connected, their adversaries are. As dangerous and powerful people are threatened with exposure, anyone is fair game for elimination. And when multiple victims die at the hands of a sociopathic serial killer, it gets harder and harder to tell where the battle lines are drawn… and who might die next.

This is another good novel of investigative technique featuring the collection of talented people at FI. The plot is a timely one, considering recent news about wealthy parents bribing people to have their children be accepted into preferred universities.

I like the FI novels. I like the variety of people using their interesting skills to solve the mystery of a serial killer. Being a private investigative outfit, they can hack into systems and get information much faster than the police can. What the FI team uncovers by methodical research and community discussion is much more complex than what it originally thought.

This novel seemed to have more relationship interaction between the FI people than previous ones. Also, there was too much sex for my taste, including one scene with a bit too much description. It seems the only way the FI people can relax or get rejuvenated is by sex.

This is a good novel for readers who like private investigation into murder and mayhem. And there was a twist at the end I did not see coming. Another good novel by Kane.

I have read a few of the previous books in this series and you can read my reviews: A Face to Die For, Dead in a Week, and No Stone Unturned.

A kill for a kill.

His target was there. Alone. Thursday night was his late night during football season. That’s when he reviewed his game strategy and player weaknesses. That’s when he targeted the next eager kid to torture until he broke.

The bastard wouldn’t be breaking anyone ever again. Not the way he’d broken Hank.

As the star quarterback in high school, Hank had gotten a full-ride Division 1 scholarship. Since he’d come from a dirt-poor family, this was the opportunity of a lifetime. A first-rate college education with a shot at the NFL. It was supposed to be a life-changing event.

Instead it turned out to be a death sentence.

His executioner had been Pete Rice. Football coach? Bullshit. Rice hadn’t coached Hank; he’d tortured him, driven him—until he’d blown out his knee on a rain-soaked football field junior year, ending his college career, his dreams. And in the end, his life.

It was first down and goal.

Rice was about to find out the true meaning of payback.

The campus grounds were soggy, leftover patches of wet leaves and an endless span of slick grass, made worse by the cold, steady rainfall. The bare trees swayed as rain pounded their branches. A wet mess. Treacherous, like a wet football field.

Slugging through the debris, he approached the athletic building, pausing yards away to don the black ski mask. He then tugged his hood back into place. No point in taking chances. Security cameras were everywhere. He didn’t need his face to be captured. Other than the mask, he could be any college student. A waterproof parka that swallowed up his body. Jeans and combat boots. Standard college garb.

He reached the building and slid Hank’s ID card into the entry slot. The card still worked. Too soon for it to be deactivated.

He was in. He wriggled into his latex gloves.

The office door was unlocked. Rice was at his desk, files spread across it. He was scribbling something on one of them, brows knit in concentration, totally focused on his work.

Clueless that he was about to die.

In one fluid motion, he was inside the office, the door closed behind him. Rice leapt to his feet, snatching the heavy football trophy on his desk as he rounded the front of it to defend himself against the intruder.

Without a word, the killer whipped out a pistol and fired two bullets, one into each of Rice’s kneecaps. Rice howled, collapsing to the floor in pain. The trophy hit the floor beside him with a thud.

The assailant moved quickly—four long strides until he was behind Rice, dragging him back to his chair and heaving him into it. He shoved a rag in the coach’s mouth to stifle his screams, then moved behind him, wrapping a strong arm in a choke hold around Rice’s throat. He pocketed his pistol, pulled out a zip tie, and leaned down to cinch the writhing man’s ankles together. That done, he slapped a digital voice recorder on the desk, with the record feature on. He yanked the rag out of Rice’s mouth, tossed it aside, and anchored his forearm against the left side of the coach’s neck, using his free hand to pull as tight against the carotid artery as he chose to—for now.

A rush of power surged through him. He could taste victory.

But there was work to be done before the final play.

“You killed Hank Bishop,” he growled. “I want details.”

When he got no answer, only a violent trembling of Rice’s body, he tightened the pressure around his neck. “Talk.”

“Wrong answer.” His grip tightened still more, enough so Rice was on the verge of losing consciousness. The coach struggled in vain, his struggles weak and fading.

His soon-to-be executioner eased the pressure the tiniest fraction. He knew just what it would take. And he wasn’t ready. Not until he got what he wanted.

“Wanna die?” he asked in a flat tone that was chillingly devoid of emotion.

Terrified, blood oozing down his legs, Rice gave a feeble shake of his head.

“Good. Because this is what it will feel like.”

He increased the pressure until Rice passed out. Slowly, he eased the choke hold until the scumbag came to.

“Now I’ll ask my question again,” he said calmly. “Why is Hank dead? Why was he in that car crash? This is your last chance. I want to hear it all—what you did, how you did it, what you drove him to.”

Rice was drenched in sweat, his entire body shuddering, choking sounds coming from his throat.

No further coercion was necessary.

Between gasps for air, the coach spilled his guts, revealing everything he’d done, everything that had happened—plus a whole lot more that was happening still.

Interesting stuff. Some of which he knew about. Still more of which he didn’t. It was even bigger than what he’d come here to learn. But frankly, he didn’t give a shit. He’d originally planned to take the voice recorder with him to relive Rice’s agonized confession whenever he chose to. But it really didn’t matter. He’d committed the bastard’s words to memory. So instead, he’d leave the recorder here, let the cops hear the entire confession, including the big-picture part that had nothing to do with Hank but that would send their investigation in the entirely wrong direction—a direction his employer wouldn’t appreciate, but that was his problem.

His adrenaline pumping, he tightened his choke hold into a death grip, pressing against the carotid artery, closing it off and squeezing the life out of his victim.

A minute later, Rice was dead.

Andrea Kane is the New York Times and USA Today bestselling author of thirty-one novels, including seventeen psychological thrillers and fourteen historical romantic suspense titles. With her signature style, Kane creates unforgettable characters and confronts them with life-threatening danger. As a master of suspense, she weaves them into exciting, carefully-researched stories, pushing them to the edge—and keeping her readers up all night.
Kane’s first contemporary suspense thriller, Run for Your Life, became an instant New York Times bestseller.

She followed with a string of bestselling psychological thrillers including No Way Out, Twisted and Drawn in Blood.

Her latest in the highly successful Forensic Instincts series, At Any Cost, showcases the dynamic, eclectic team of investigators as they square off against a criminal organization with a serial killer as a hit man. The first showcase of Forensic Instincts’ talents came with the New York Times bestseller, The Girl Who Disappeared Twice, followed by The Line Between Here and Gone, The Stranger You Know, The Silence That Speaks, The Murder That Never Was, A Face To Die For, Dead In A Week, No Stone Unturned and At Any Cost.

Kane’s beloved historical romantic suspense novels include My Heart’s Desire, Samantha, Echoes in the Mist, and Wishes in the Wind.

With a worldwide following of passionate readers, her books have been published in more than twenty languages.

Kane lives in New Jersey with her family. She’s an avid crossword puzzle solver and a diehard Yankees fan.

Posted by Joan Nienhuis at 5:31 AM

Thanks for the review. I read this one myself and thought it was very good!