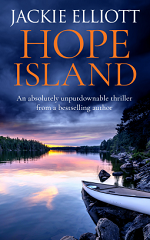 Andrea “Andi” Silvers is starting to feel like this tiny fishing village of Coffin Cove, on the Vancouver coast, just might be home. She’s living with Hephzibah and sort of dating Harry. Her job at the Gazette is going well. Things are looking up. Then the body of a young woman is found on nearby Hope Island, where Hephzibah and Harry’s mother moved to when they were children. Andi sets out to get the scoop on the story. She wants to be the one to identify the body and to find out what happened.Meanwhile, Inspector Vega is on holiday in the Yukon, and finds himself caught up in a murder investigation there. A woman has been killed and her husband clinging to life in hospital. It soon becomes clear that there’s a link to Coffin Cove. The man grew up there and left after his first wife disappeared. Could the body found at Hope Island be his missing wife? The stakes ramp up when Harry and Hephzibah’s dad is discovered murdered on his boat.  Did he know something he shouldn’t? The deeper Andi digs, the more dirt she uncovers. But are any of them ready for the truth?

This is the third novel I have read in this series taking place on Vancouver Island. This mystery is a little more involved in that we are also taken to the Yukon and murders there. Those murders do relate to what happened in Coffin Cove years ago and is happening today. The connection is slow in coming, as is the identity of the long dead person recently uncovered. We do get a very real sense of how hard it is to investigate a murder and identify the culprit. I like how Andi, Harry, and others in Coffin Cove pursue answers in a somewhat unorganized but effective way.

The plot is a good exploration of past actions, things done in the passion of youth, and how those actions have consequences into the present day. Those consequences can be deadly when the historical deed was done by someone of current power and influence.

I was pleasantly surprised at the introduction of Andi's father into the narrative. I look forward to seeing how he and Andi relate in future novels. I do like this series and will be looking for the next one.

I have read the previous novels in this series and you can read my reviews: Coffin Cove and Hell's Half Acre.

Jackie Elliott, writing under the pen name J.M. Elliott, is the author of the Coffin Cove Mystery series. Originally from the UK, she settled on Vancouver Island in 2004. She is now married to Bob, a commercial fisherman and accomplished storyteller. Also by Jackie is the Maggie Carroll Mystery Series (under the pen name J.M. Sharp), set in post war Britain. She has also written several non-fiction books, based on her award winning blog, and a recipe/story book about her husband's stories and life on Vancouver Island. You can find out more at https://www.jackieelliottwrites.com/
Joffe Books, 318 pages.
I received a complimentary egalley of this book from the publisher. My comments are an independent and honest review.

Posted by Joan Nienhuis at 1:39 PM