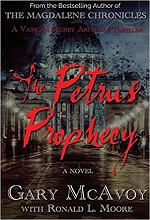 Father Jonah Barlow is dead. The respected Jesuit scholar of apocalyptic studies might have died from a fall in his apartment . . . or was he pushed? All that is known for sure is that the provocative manuscript he was working on—a book that promised to reveal the upcoming fulfillment of ancient and recent prophecies, including the ghastly and shocking Third Secret of Fátima—is missing.

Two female detectives—one from Chicago, the other from Rome—take on the investigation as a possible homicide, turning to Vatican archivist Father Michael Dominic for his help, since Barlow sent the young priest the only other copy of the manuscript.

Newly elected Pope Ignatius, Enrico Petrini, intent on verifying the content of the manuscript against the original handwritten version of the Third Secret—which has been kept sequestered in the Pope’s personal vault for decades—discovers that the keys have been stolen. The search is on for the only other set, kept safely in the hands of a trusted monk in Jerusalem. Meanwhile, a sinister ancient order known as the Knights of the Apocalypse seem to be using the predictions of the manuscript to create fear and chaos as the prophecies appear to be coming fulfilled. Is the end of the world imminent?

From Chicago to Jerusalem to Scotland, from Rome to the ancient island nation of Malta, join Father Dominic, journalist Hana Sinclair, their trusted team of Swiss Guards, a French commando, and the two detectives as they solve the bewildering puzzles of the Petrus Prophecy.

I have read all of McAvoy's novels and this may very well be the best one yet. As in his earlier novels, he does a great job combining historical facts and current ideas in a well presented setting, all through a creatively imagined and compelling plot. McAvoy usually explores nefarious deeds centered on historical aspects of the Catholic Church. This novel was especially interesting to me because it explores current ideas about the Lord's Second Coming, something Protestant Christians concentrate on too.

In this novel, a sect of the Catholic Church is obsessed with the Second Coming. McAvoy plays on the Protestant Christian habit of trying to find prophetic fulfillment in current events. The Catholic sect goes one step further in actually trying to create the prophesied events.

I really like how McAvoy explores the nature of Bible prophecy in general, such as its vagueness, being open to various ideas of fulfillment. I like how he brings attention to what Dominic calls End Times fever, something that “crops up every few generations.” (1656/3880) I like his using the fact that people see what they want or expect and how easily they can be manipulated in that respect.

I really liked this engaging novel. While it deals with a sect in the Catholic Church, the compelling plot will be appreciated by anyone interested in how Christians approach the immanent nature of Christ's return. McAvoy does an excellent job of combining historical facts with his imaginary fiction, distinguishing them in his notes at the end. While this novel is down the line in a series, it reads well on its own. It's a good one to start with if none of his novels have been read.

Gary McAvoy began his writing career writing columns for a small town weekly newspaper and articles for a regional Southern California magazine. That laid the foundation for corporate communications work supporting his own and clients' businesses. He was fascinated with cryptology and intelligence during his U.S. Army tour in Germany. Following his military service, he built a number of successful ventures in Southern California and then moved to the Pacific Northwest. You can find out more about him and his books at https://www.garymcavoy.com/.

Ron Moore has an undergraduate degree in biology from University of California Riverside and a JD from Western State University College of Law, a master's in Forensic Toxicology from the University of Florida, and an AA in culinary arts from Saddleback College. He also obtained a Catholic Lay Ecclesial Minister certificate. He worked for over 18 years in forensics and CSI, the practiced law for 8 years before returning to forensics as a toxicology consultant. He was also an EMT for four years. He was a reserve deputy sheriff for over 14 years, assigned to the Search and Rescue unit. He was also a Sergeant in the Bloodhound Team. He holds a black belt in Judo and a brown belt in Aikido. Moore and his wife live in Southern California where he enjoys outdoor activities. You can find out more at https://www.ronaldlmoore.com/.

I received a complimentary digital copy of this book from the author. My comments re an independent and honest review.

Posted by Joan Nienhuis at 9:15 AM