It's News to Me by R G Belsky 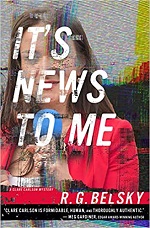 This is the latest novel from Belsky featuring Clare Carlson, once crack newspaper reporter now TV news reporter and executive. I have followed her amateur sleuthing through several novels, liking every one.

Clare has two tasks in this novel. One is to survive the ruthless executive placed over her. Endicott has only ratings in mind, no matter who is harmed. That goes against Clare's personality and the sparks fly. Clare must also find out who brutally murdered a college student and why. Clare is tenacious, going after unanswered questions even when the police think they have the murderer behind bars.

Belsky provides a good balance of mystery and personal life. Clare's a brave and savvy amateur sleuth. She also has a tough time living a successful personal life. She's a flawed character having made some very stupid personal decisions. Yet I still get the impression she has a good heart, often following it to relationship disaster. Her character provides some snappy relationship dialogue and thoughts. “When the going gets tough, the tough go eat.” (2504/3089)

Belsky was in the news profession and it shows. I like how he relates the tension in the news room, contrasting the pressure for ratings with compassion for the victims and their families. Belsky also lives in New York and he does a great job creating the setting for us. His writing style is good and I like how he portrays Clare's quick wit, troubled relationships and tenacious investigation.

This is the fifth book in the Clare Carlson series but reads well on its own. It releases October 4, 2022. You can read my reviews of the earlier books in the series: Yesterday's News, Below the Fold, The Last Scoop, and Beyond the Headlines.

R G Belsky is an author of crime fiction and a journalist in New York City. The first Clare Carlson book, Yesterday's News, won the David Award at Deadly Ink for Best Mystery of 2018. The second Clare Carlson book, Below the Fold, was named Best Mystery of 2019 in the Foreword INDIES Awards. He has also written thrillers under the pen name of Dana Perry. Belsky is the former managing editor of the Daily News, a top editor at the New York Post, Star magazine and NBC News. He writes from an extensive background in newspapers, magazines and TV/digital news. He lives in New York City. You can find out more at https://www.rgbelsky.com/