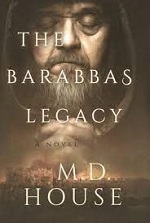 In this poignant capstone to the trilogy, the man called Barabbas—infamous former thief, murderer and prisoner turned Christian—and his wife Chanah continue their mission of spreading the gospel across the known world as cauldrons of political and military chaos boil across the Roman Empire. Nero is increasingly erratic, and it’s only a matter of time before the sharp knives of imperial politics finish him off. Various successors vie for position. Who will strike first, and who will come out on top?
Meanwhile, the rebellion in Judea has intensified, the Jewish zealots exerting great influence over the minds of the people. General Vespasian and his son Titus aim to put a permanent end to the insurrection. How many lives will ultimately be sacrificed on the great altar of Jerusalem? Can the Jewish nation survive the fulfillment of Jesus’s prophecy? What will become of the Jewish Christians and the apostles and sisters who lead them? And where will Barabbas and his family find lasting peace?
You can watch the book trailer here.

This is a good novel exploring the early church through the destruction of Jerusalem in AD 70. House does a good job of describing the tension Christians experienced as false teachers, like Demas, spread lies and Roman rulers, like Nero, turned on Christians. Jerusalem is becoming a more hostile location for Christians, the future of the church is uncertain and many flee to other areas.

The narrative follows the experiences and travels of Barabbas and others, such as Paul, Cornelius, and a Roman soldier. We see how the gospel was spread to many locations, including Britannia. We hear of apostles martyred and their replacements chosen. We experience the hope of the early Christians, that the Lord would return soon.

I like the historical and geographical details House has included. I like the addition of unverified but interesting possibilities, such as the reality of Paul's wife and children. Most of all I like the underlying theme of a murderer prepared to die being given life and ministry by the Redeemer. Barabbas' life is “a testament to the fact that Christ can reach us and lift us no matter how far we fall, and he can take the unlikely and do the seemingly impossible.” (1853/5547)

While this is the last in the Barabbas trilogy, it reads well on its own. House has included sufficient backstory to make this novel understandable and engaging. I did read the second in the series and you can read my review of The Pillars of Barabbas here.

M.D. HOUSE is the author of The Barabbas Legacy, as well as the first two volumes in The Barabbas Trilogy, I Was Called Barabbas and Pillars of Barabbas. He also authored the science-fiction novel, Patriot Star. Before beginning his second career as a writer, he worked for twenty-five years in the world of corporate finance, strategic planning, and business development. Now, Michael lives in Utah with his wife, where he spends his time writing and enjoying his children and grandchildren. Learn more about Michael and his work at www.mdhouselive.com.
Independently published, 376 pages.
I received a complimentary digital copy of this book through Nicole Ballengee, Literary Publicist. My comments are an independent and honest review.