The Pillars of Barabbas by M D House 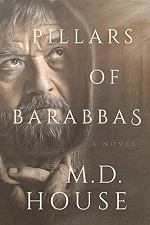 The man they called Barabbas has come a long way from the wretched prisoner released by Pontius Pilate in lieu of Jesus of Nazareth. He and his wife Chanah are growing in regard among the leadership of Christ's fledgling church, which is expanding and thriving.

But increasing Christian influence breeds jealousy among several Roman governors and senators. How will Emperor Nero react? Can the apostle Paul soothe the moody young ruler? The Parthian Empire is also a problem, including in Africa, where the former centurion Cornelius has become a prominent Christian leader. Will the Christians be able to flee, or will they have to fight both the Romans and the Parthians?

This is the second novel in a series but reads well on its own. House has done a great deal of research to create a novel reflecting a possible situation for the early church. The events in the novel take place about thirty years after the crucifixion. We see how early church leaders were chosen and directed by God. Paul preaches sermons and has various experiences that generally follow what we know from the New Testament. The strength of this novel is the setting with great descriptions of buildings, travel, communication, etc. In fact, when House described the dwelling of a Roman senator as having glass windows, I had to make sure that Romans did, in fact, have window glass by that time. House does a good job of describing the tension between Jews and those of their religion who converted to Christianity.

There are some aspects of the novel that I found a little surprising, however. Paul is portrayed as being instrumental is establishing a building, center for the church in Rome. It is described as a “sacred temple” (75) and a Christian temple. (134) We are told there are temples being built by Christians in many cities. My understanding is that archaeological evidence shows Christians did not begin to construct buildings for worship until the end of the third century, meeting in homes before that. So I don't understand where the idea that Christians were constructing “temples” in the first century comes from.

One potential problem with biblical fiction is putting words in the mouth of a biblical character that is not recorded in the Bible and is not even an extension of what the person is recorded as saying in the Bible. House has done that in this novel. Paul tells Nero that he would be taught directly “by the Spirit of God, speaking to your spirit, which once dwelt with him in the heavens.” (73) Barabbas' wife at one point wonders who of those she met she had known intimately before her mortal life. (86) Paul says seekers of truth may not find the fullness of truth in this life, “...if not they will find it in the next life.” (72) Cornelius comments to another that God “remembers what you learned before you came here to earth, the promises you made.” (126) Evangelical Christians will definitely have a problem with the concept of relationships, experiences and promises prior to earthly life while Mormons may embrace it.

This is a good novel reflecting the situation of the early church about three decades after the crucifixion. I would caution readers to pay attention to concepts presented in the novel that do not reflect the beliefs of evangelical Christians.

M D House is the author of The Pillars of Barabbas, as well as the first book in the series, I Was Called Barabbas. Before he began his career as a writer, House worked for twenty-five years in the world of corporate finance, strategic planning, and business development. He lives in Utah where he spends his time writing and enjoying his children and grandchildren. You can learn more at www.mdhouselive.com.

I received a complimentary digital copy of this book through a publicity agent. My comments are an independent and honest review.

Posted by Joan Nienhuis at 5:58 AM

Thank you for your thoughtful review! It was an absolute joy to write this book, and it's wonderful to hear different perspectives on our shared faith in Christ and his redeeming love for us.

If you're curious, here's the discussion I had yesterday with Rick and Dan on FaithTalk Live. It was a lot of fun, and they were great.