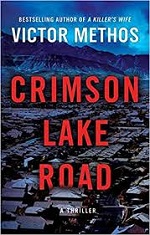 This is the second in a series but it read very well all on its own. There is enough backstory included soon so a reader is caught up to the previous action right away.

I enjoyed the good balance of character development and investigative action. The character development centered on a prosecuting attorney with a complex situation. She had been, unknowingly, married to a serial murderer. He's now in prison but the whole experience haunts her. She's ready to retire and move elsewhere when a gruesome case temporarily becomes her responsibility. I liked how she faced her own demons to help uncover the murderer.

But it is not a simple case and that leads to a plot also incorporating a detailed investigation. All the evidence seems to point to one person. The relationships and past history exposed during the investigation are complex, leading to a number of twists and surprises near the end of the book.

The murders are somewhat gruesome, patterned after gruesome paintings. The motive for the killings was puzzling until near the end when past events and relationships came to light. Methos' writing style was easy to comprehend. The book was entertaining and I will be looking for more from this author.

Victor Methos immigrated to the United States from Kabul, Afghanistan, at the age of nine. He attended law school at the University of Utah and has been both a prosecutor and criminal defense attorney. He is the bestselling author of over 50 novels and has been nominated for the Edgar Award and received the 2020 Harper Lee Prize for Legal Fiction. He currently lives in southern Utah.

Posted by Joan Nienhuis at 8:35 AM