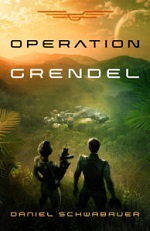 It’s the war story he’s dreamed of. But the battle may cost him his mind.

But when his commanding officer, Captain Ansell Sterling, is fatally wounded before the negotiations can begin, Dahl can no longer just report on the mission. He’s ordered to complete it. With help from the AI embedded in Sterling’s comms bracelet, Dahl must impersonate his commander—a Marine Corps hero and psychological operations expert.

However, Sterling’s AI may be luring him to surrender more than he realizes. And the mission Corporal Dahl thinks he’s running isn’t the only operation underway.

This futuristic novel is a psychological exploration of truth and the telling of lies to advance a cause. Much of the novel is about memories, whether real or manufactured. There is quite a bit of backstory interspersed with the present action but sometimes that backstory is itself a lie. It is an era when people wear a comms bracelet that can be invaded and reality, or the perception of it, manufactured. Like some of the characters, I was unsure of what was really happening or who was really telling the story.

One aspect of speculative fiction or science fiction is world building. There is next to no world building in this novel. I felt like the action was taking place on a bare stage. A case in point was a hike through the jungle for several hours. There was no description, not of a tree, a rock, anything. It seemed like the action was somewhere but was not grounded anywhere. We readers are initially thrust into a world and society and impending war without any framework. We learn much more about the history of the main characters than we do about the history of the situation they find themselves in.

This novel is for readers who like one with a plot centered on mind games. You'll experience contradictory memories of events. You'll wonder which of the characters are who they claim to be and whether some of them are actually real. And you'll have a twist at the end that may surprise you.

This novel is sometimes listed within the Christian fiction genre but there is nothing about Christianity in it. In fact, at one point the hero remembers going for a weekend with a woman he's not married to and speaks of “our hotel room.” (315/3755) The hero also frequents night clubs (374/3755) and likes to drink bourbon. (315/3755) Don't expect any spiritual insights from this novel. It is purely psychological and adventurous fiction.

Daniel Schwabauer, M.A., is a lifelong reader of speculative fiction. He studied the genre under science fiction great James Gunn before graduating with honors from Kansas University’s Masters program in Creative Writing in 1995. Winner of the Eric Hoffer and Ben Franklin awards for his middle grade fantasy series, The Legends of Tira-Nor, Daniel enjoys riding his motorcycle on country roads and pondering other worlds. He lives in Kansas City with his wife and dog.

The Operation Grendel Origin Story
I’ve always been fascinated by the power of storytelling, especially as a lever for moving culture.  For several years I studied the development of modern propaganda, the rise and fall of yellow journalism, and the relationship of these to psychological warfare. This culminated in 2017 with a brief investigation into quantum computing and the rising popularity of trans-humanism. Sometimes the best story ideas are combinations of things that have rattled around in the back of your mind for years.
Operation Grendel is a keyhole glimpse of a future in which every person in the galaxy is bonded to an artificial intelligence. Some AIs are embedded in the brain, and some are snapped onto the wrist as a wearable device. I didn’t realize when I started writing the book that Elon Musk had already launched Neuralink to create this technology in real life. I discovered the corporation after finishing my fourth draft.
The use of this technology probably means a lack of autonomy. How can you think for yourself, or even know what you think, if your thoughts are constantly being shaped and influenced by a quantum computer wirelessly connected to your brain?
Then again, is that all we really are as humans—biological computers? I don’t think so. But if not, then there will surely be resistance to the trans-humanist movement. Which means, in a work of fiction, clearly opposing sides. One empire supports this integration of man and machine; the other places limits on AI technology.
But “warring empires” was not a story I felt capable of telling. I wanted something closer to home, something smaller and more accessible, something more human. I wanted to show what a life spent entirely under the influence of an inner nanny—a substitute Holy Spirit—might look like.
Well, who better to tell that story than a man who has, in his own way, been manipulating others through storytelling? In other words, a journalist.
This fit my desire to write the story as military science fiction. Since I never had the honor of serving in the armed forces, I needed a way to give my narrator a believable voice. Corporal Raymin Dahl, a military reporter who barely scraped his way through reservist boot camp, fit the bill.
Before long the story seemed to take on a life of its own.

Through the Fire Blogs, April 4

Adventures Of A Travelers Wife, April 5

Because I said so — and other adventures in Parenting, April 6

For Him and My Family, April 10

Labor Not in Vain, April 12

Thank you for sharing your honest review!