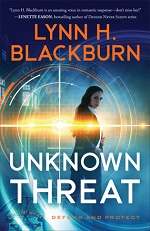 This is a novel much more about characters and relationships than it is about investigating who has been killing Secret Service agents and why. Faith, the lead FBI agent on the case, has a number of relationship issues, including with her mother and with God. Luke, the hero Secret Service agent, has distrust of the FBI from past experiences. That doesn't stop him from falling for Faith, however, and there is much about the budding romance. It seemed like there is more dialogue about the romance than the investigation. I felt it was too much emphasis on romance. At one point Luke wasn't thinking about being the target of a killer, we're told. “There was only Faith.” (3171/4913) At another point, he is overwhelmed with the desire to kiss her. “So much for being professional,” we're told. (3881/4915) That's not my idea of a suitable hero in a novel of suspense.

There is also a great deal of interaction between the agents in the novel. There is more emphasis on their chatter and quips and talk of potential romance than talk about the case. I have to admit I skimmed parts of that interaction, wanting to get to the next plot moving scene. And I was surprised that a private citizen was better at getting leads on a suspect than the FBI. (3864/4915)

This is definitely a novel for readers who like a little bit of suspense from time to time with most of the book dealing with potential romance.

Lynn H Blackburn is the author of several thrillers. She is the winner of the 2016 Selah Award for Mystery and Suspense and the 2016 Carol Award for Short novel. She lives in Simpsonville, South Carolina with her husband and their three children. Photo credit: Mary Denman.

Posted by Joan Nienhuis at 8:14 AM