The Purple Nightgown by A D Lawrence 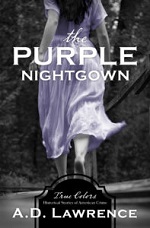 Marvel at true but forgotten history when patients check into Linda Hazzard’s Washington state spa in 1912 and soon become victim of her twisted greed.

Heiress Stella Burke is plagued by insincere suitors and nonstop headaches. Exhausting all other medical aides for her migraines, Stella reads Fasting for the Cure of Disease by Linda Hazzard and determines to go to the spa the author runs. Stella’s chauffer and long-time friend, Henry Clayton, is reluctant to leave her at the spa. Something doesn’t feel right to him, still Stella submits herself into Linda Hazzard’s care. Stella soon learns the spa has a dark side and Linda a mean streak. But when Stella has had enough, all ways to leave are suddenly blocked. Will Stella become a walking skeleton like many of the other patients or succumb to a worse fate?

I really appreciate this series, drawing my attention to unusual and generally forgotten crimes in the past. I was particularly interested in this one as it centers on events in my native Washington State.

The novel is mostly an exploration of the kind of person who would have been attracted to Linda Hazzard's clinic. She claimed all ills could be cured by fasting and people desperate for better health were attracted to her false promises. They were people taken in by a promise that should have seemed too good to be true. Much of the novel is the thinking of Stella, why she agreed to stay, what was going on, how could she escape, etc. It showed the anxiety a person felt being mistreated with no possibility of escape. There is also much thinking by Henry. I have to admit, I skimmed much of those thoughts, anxious to get to the next scene of action.

A weakness of the novel was the setting. It was not until 11% into the book I found out the opening was set in San Francisco. I was a bit confused up to that point, knowing the novel was supposed to be set in Washington. And I was a bit disappointed in the Washington setting. Knowing the location of Olalla on the east side of the Olympic Peninsula, I was surprised Lawrence wrote of the ocean a mile to the west. (923/3134) The Pacific Ocean is a good 50 to 60 miles to the west!

I also had a bit of a problem with an aspect of the plot concerning the ability to escape Hazzard's spa. Stella walked into Olalla, as did at least one other patient. Stella could have asked for sanctuary from the store owner she talked to yet did not. That just seemed a bit strange.

I do appreciate being informed about this interesting event from the past. Except for the issues I noted, this book is a good one for readers wanting to explore the thoughts and emotions of a person held captive in a dire situation.

A.D. Lawrence makes her home in Northeastern Nebraska. She has been passionate about writing and true crime for years, and her two obsessions melded into the goal of authorship. She is an active member of the ACFW, writes a true crime blog, won the 2019 Crown Award and was a 2019 First Impressions finalist.