The Miracle Collectors by Joan Luise Hill and Katie Mahon 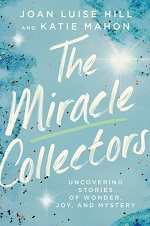 The authors explain how they were meeting for coffee after dropping of their kids and realized each of them had experienced a miracle. It set them on a chase for miracles. The three wrote The Miracle Chase. Two of the women have penned this sequel.

Hill and Mahon cover three areas in the book. They encourage us to be aware and keep an open mind to recognize miracles. They encourage us to share our miracle stories as that deepens our connections. They also suggest we will find greater meaning in our journey of life by recognizing the intervention of the divine.

This book is aimed at religious people in general. Evangelical Christians might have issues with the authors drawing insights from other religions. They include information from many sources, such as the Dalai Lama, Deepak Chopra, Marianne Williamson, Buddha and Gandhi. They make reference to spirit guides and reference The Celestine Prophecy.

The book contains a number of stories. Some may be miracles while others seemed merely a coincidence. Many of the stories highlight one person realizing the need of another. The authors emphasize the role of love and mercy, increasing compassion in relationships.

Katie Mahon experienced a miracle as she safely walked away from an encounter with serial killer Ted Bundy. She has a BS in psychology from Santa Clara University and spent nearly twenty years in banking before staying home with her daughters. She lives in New York City with her husband and enjoys chasing miracles with her four grandchildren.

Joan Luise Hill experienced a number of coincidences that could not be ignored. She had a lengthy career in medical administration and has a master's degree from the University of Connecticut and a BS from Boston College. Hill and her husband are avid and constant travelers.

I received a complimentary egalley of this book from the publisher. My comments are an independent and independent review.

Posted by Joan Nienhuis at 6:32 AM