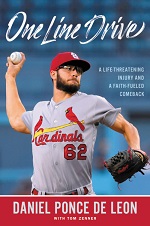 This is a good memoir for baseball lovers. Ponce de Leon's story is full of ups and downs, successes and failures. His greatest challenge came when he was pitching in Triple A and was hit in the head by a line drive. Potentially life threatening with possible cognitive impairment, Ponce de Leon attributes his survival to prayer. He knows everything that happens, good or bad, happens for a reason and he realized this injury was a wake up call from God that changed his life.

This well written memoir follows his rocky career, playing with college teams and in the minor leagues. He shares the experiences of so much travel, the frustrations, and his spiritual journey. He'd be called up to the Cardinals one week then demoted back to Triple A the next. He persevered, always doing his best.

Ponce de Leon realizes God has given him a platform as a professional athlete and he wants to motivate, inspire and encourage others. There will be disappointments. There will be failures. Work hard and stay humble, he advises. As of this writing, his position in the Cardinals pitching rotation for this season was uncertain.

The book is well written and good inspiration for aspiring athletes.

Daniel Ponce de Leon is a Major League Baseball pitcher for the St. Louis Cardinals. His inspiring baseball story includes a long winding path from high school to the majors, including recovering from a life-threatening skull fracture and brain injury that occurred when hit by one line drive. A devout Christian and faith-driven family man, he spends the off season with his wife and two children in New Smyrna Beach, Florida.

Tom Zenner is a twenty-five year media veteran. He was a frontline television sports anchor at NBC 5 in Chicago, Fox 25 in Boston, and ABC 15 in Phoenix. He has written more than 40 commemorative sports championship books on teams that won the Super Bowl, World Series, NBA Championship, and Stanley Cup. He lives in Manhattan Beach, CA, with his wife and children.

Posted by Joan Nienhuis at 8:39 AM